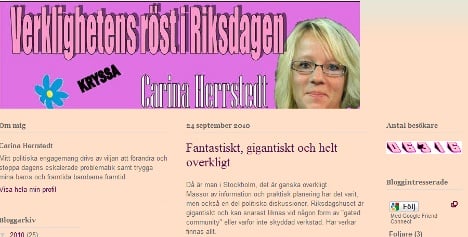 39-year-old Herrstedt was ordered by the court to pay 5,000 kronor ($753) to Jan Jönsson, the former chairperson of the Communist Party of Sweden (SKP), for claims published on her blog that he had said that handicapped people had no right to exist and would be the “first target group for extermination camps that he would like to establish”.

This is the third time that Herrstedt has been convicted of libel by the Lund court.

The 39-year-old, who has been a party member since 2006, was previously convicted by the court for libelling Jan Jönsson’s son Fredrik in November 2009, where she described him as a “criminal and a saboteur”, and on a further occasion in April 2008.

Despite the fact that Sweden Democrat leader Jimmie Åkesson set up two criteria for Riksdag candidates ahead of the 2010 elections – no connections to neo-Nazi groups and no criminal convictions – Herrstedt has taken her place in parliament and the party has continued to offer her its support.

“I haven’t personally invested time in the judgement, but our legal experts who have, have said that it is almost ridiculous and can be regarded as having political overtones,” said Sweden Democrat press spokesperson Erik Almqvist to The Local on Wednesday.

When asked why the party was making an exception to its principle of not having people with criminal records as representatives in Sweden’s Riksdag, Almqvist replied:

“I see this more as a civil case. I find it hard to consider it criminal behaviour,” Almqvist said, adding that the case should be placed in the context of a long political struggle between left wing groups and the far-right Sweden Democrats.

“But as a rule we do not want to be connected with any form of criminal behaviour,” Almqvist said.