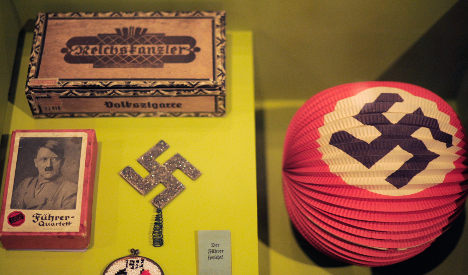 “Hitler and the Germans: Nation and Crime,” attempts to address how and why the Nazi dictator held such sway over average Germans, Simone Erpel said.

But the extensive collection of Nazi-era propaganda and artefacts does not glorify Hitler, she said, adding that the objects are addressed with “critical distance.”

“We’re not making Hitler look like a hero,” Erpel said.

SEE PHOTOS OF THE EXHIBITION HERE.

Six years ago a similar exhibition concept entitled “Hitler and the National Socialist Regime” was rejected because critics said it seemed to personalised. The new exhibition opening on Friday allows visitors to form their own opinions of the Führer, though, Erpel explained.

“This nimbus hasn’t been touched for decades,” she said.

While addressing the topic of Hitler and the Nazis is no longer taboo in Germany, the visualisation of the man himself remains problematic, making some exhibition pieces impossible.

While a Moscow museum displays one of Hitler’s uniforms, borrowing it for the exhibition was not an option.

“Something worn by Hitler, even if it was just twice, could become a fetish,” Erpel explained.

Neither would a biographical approach have been appropriate, she said, insisting the focus was on the German people’s historical relationship with the dictator.

“Those who go in expecting a Hitler exhibition will be disappointed,” the curator said.