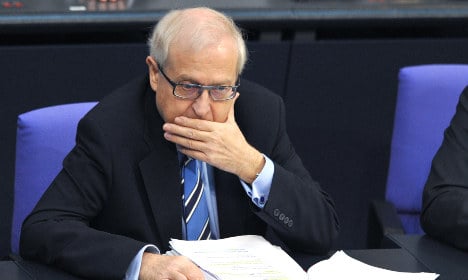 “The danger of a trade war has appeared on the horizon,” Brüderle told reporters travelling with him on his two-day trip to China, which was to include stops in Beijing and Shanghai.

“The danger is that complaints about currency undervaluing lead to retaliatory measures, which could eventually turn into a trade war,” the minister said, without naming a specific country.

Beijing has come under increasing pressure from its trading partners in the United States and Europe to allow the yuan to appreciate at a faster pace. Critics say the unit could be undervalued by as much as 40 percent.

The US House of Representatives last month passed a bill that would expand the Commerce Department’s powers to slap tariffs on China for currency manipulation, rather than just outright subsidies.

The legislation must still go through the Senate and eventually be signed by President Barack Obama in order to pass into law.

The spectre of a global currency war dominated the annual meeting of the International Monetary Fund in Washington over the weekend, but no agreements were reached.

“We must not allow the situation to get out of hand, or turn our backs on free trade,” Brüderle said, adding that he saw himself as an “ambassador, perhaps even a missionary, for the fight against protectionism.”

Brüderle will replace ailing German Finance Minister Wolfgang Schäuble at upcoming Group of 20 meetings in South Korea, where he said he hoped the world’s major economies would come up with “reasonable solutions.”

After his stop in China, which will include meetings with key officials in Beijing and a stop at the World Expo in Shanghai, Brüderle will head to Japan.