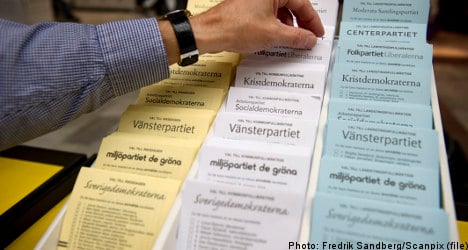 The appeals, all submitted by private individuals, variously demand that national or local elections be retaken, or vote recounts conducted in certain constituencies.

The grounds for appeal detailed in the communications to the authority have varied from the reported loss of ballots, to questions over why votes had been declared invalid, to more elaborate conspiracy theories referring to alleged vote rigging and even espionage.

Furthermore a parliamentary candidate for the Left Party has queried why only two preference votes have been registered when he has been assured that his entire family put a cross by his name.

While the 102 appeals submitted by the October 8th deadline dwarfed the number submitted last time around in 2006, Vivan Nilsson, a spokesperson at the Election Authority, argued that more perfunctory reasons lay behind the increase.

“At the last election in 2006, six or seven people appealed. That there are so many now is probably due to the fact that it is now possible to appeal via email,” she said.

The appeals have now all been collated and forwarded to the Election Review Board (Valprövningsnämnden) for consideration and have now been published.

Many of the emails included no explicit grounds for appeal, and a number argued that the far-right Sweden Democrats’ success in claiming parliamentary seats was sufficient cause for a retake.

Many of the emails alleged voter registration and/or voting booth irregularities such as identification not being properly checked or the lack of ballot papers available for a chosen party.

“The entire procedure is very mysterious and I think that the man, who wandered around all the time removed the ballot papers,” wrote one appellant.

Several emails to the authority were of an altogether more clandestine nature with allegations of vote rigging and espionage at play. One man even linked the alleged cheating with the (false) bomb threat on a Pakistani airliner which landed at Stockholm Arlanda airport on September 26th, a week after the election.

The Election Review Board, which is located within the Swedish parliament, the Riksdag, will now consider the appeals and decide on whether any further action should be taken with several observers predicting that recounts and possibly re-elections can be expected in, for example, Dalarna.

Several constituencies in the Swedish election, which left the governing Alliance two short of a parliamentary majority, were decided by a mere handful of votes with allegations abounding in the media in the days following the election that not all ballot papers had been handled according to protocol.

The board is the only authority with powers to call for a recount or new election in a district if problems affecting the outcome of the election are deemed to have occurred. The board’s decision can not be appealed.