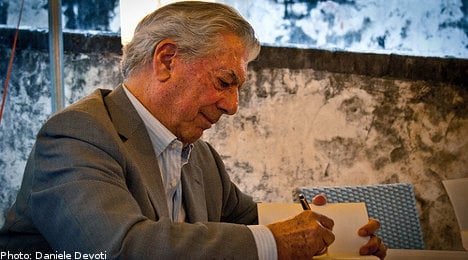 Announcing the award the academy hailed “his cartography of structures of power and his trenchant images of the individual’s resistance, revolt, and defeat.”

74-year-old Vargas Llosa is one of Latin America’s most significant novelists and essayists after having risen to fame in the 1960s with novels such as The Time of the Hero (La ciudad y los perros) and Conversation in the Cathedral (Conversación en la catedral), and several of his books have been adapted as movies.

While he has won a string of prestigious literary awards, including the Cervantes Prize, and has been named several times in connection with the Nobel prize, he expressed surprised at having at last brought home the premier prize in literature.

“I’m still very surprised, I really had not expected this… I thought I had been completely forgotten by the Swedish Academy, I did not even know that the prize was being awarded this month,” Vargas Llosa said to the TT Spektra news agency on the phone from New York.

The author is known for having a command over several genres of writing and also for his perception of Peruvian society, while his latter career has seen him grapple subjects from the world outside of his home country.

He is known for historic novels such as The War of the End of the World (La guerra del fin del mundo), and during the 1980s and 1990s wrote shorter works. His novel The Feast of the Goat (La fiesta del chivo) was published in 2000 and brought an end to an almost 20 year period without a major work.

He continues to write both journalism and fiction and travels the world extensively.

Vargas Llosa ran for the Peruvian presidency in 1990 as a centre-right candidate, reflecting a shift from the left-wing, and pro-Castro, sensibilities of his youth and many of his Latin American peers. During the 1980s Vargas Llosa became famous for his staunchly neoliberal views.

Vargas Llosa lost the election in a run off against Alberto Fujimori, a contest he described in his memoir A Fish in the Water (El pez en el agua, 1993).

The author/politician’s market economics credentials were further established when he wrote the foreword to Hernando de Soto’s heralded text The Other Path: The Invisible Revolution in the Third World.

The 74-year-old is also known for one of the most famous literary feuds of modern times, with fellow Nobel laureate Gabrial García Márquez, who are reputed to having not exchanged words for over 30 years. The feud is reported to have its origins in a fight in a cinema in Mexico City in 1976 and involved his wife Patricia.

The author has since the 1990s lived for the most part in London, but spends a significant part of each year in his homeland.

Peter Englund, the permanent secretary of the Swedish Academy, confirmed that the author was very pleased when told of the award and is planning to visit Stockholm to collect the prize.

“One can see in his works that this is a passionate man. And it was a passionate man’s reaction, he was very, very happy and very touched,” said Englund to the media after the announcement.

Nobel Week continues on Friday with the announcement the Peace Prize and will conclude on Monday with the Sveriges Riksbank Prize in Economic Sciences in Memory of Alfred Nobel.