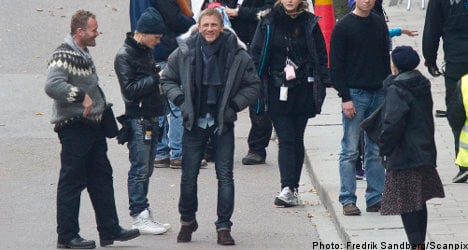 Craig, who portrays protagonist Mikael Blomkvist, arrived in Uppsala in eastern Sweden earlier this week to begin commencing of the film, which also stars Rooney Mara as hacker Lisbeth Salander.

But with filming also set to get underway in Stockholm’s Södermalm district this weekend, one local resident isn’t happy with the associated disruption.

“To restrict us from reaching our homes by car for such a long time and with such short notice is, in my opinion, unacceptable,” the woman, who resides in Stockholm’s Södermalm district, wrote in her complaint to the Office of the Parliamentary Ombudsmen (Justitieombudsmannen, JO).

According to the woman, she only received notice about restricted car access in the area one week ahead the scheduled film shoot, which begins early Friday morning.

She added that a film shoot is not a good enough reason for blocking off public streets to cars for much of the weekend.

The film shoot takes place from 5am to 8pm on Friday and 10am to 9pm on Saturday along St. Paulsgatan. The intersections along St. Paulsgatan that will be blocked include Bellmansgatan, Kvarngatan and Ragvaldsgatan, according to a notice provided by the film crew.

“On these days, there will be a lot of people on the street, as well as large vehicles, film equipment and cables on the ground. We ask you to pay attention when crossing. Transport and delivery vehicles will generally not be able to move within the cordoned-off area,” reads the flyer left by the film production company GWDT Film and issued last Thursday.

The woman acknowledged that cars could leave her street through the schoolyard of an upper secondary school across the street, but because of the directions of the neighbouring one-way streets, drivers could not return to their homes.

She added that she has been unable to reach the site manager, who did not provide a full phone number on the flyers posted in the neighbourhood about the traffic disruptions.

In addition, the Friday shoot includes artificial rain on the street. The flyer asked residents to close all balcony doors or windows facing St. Paulsgatan, as well as nearby windows on Bellmansgatan and Kvarngatan. It also asked residents to cover up any water-sensitive properties and apologised for the limited accessibility.

Attempts by The Local to reach the complainant and the film company were unsuccessful.