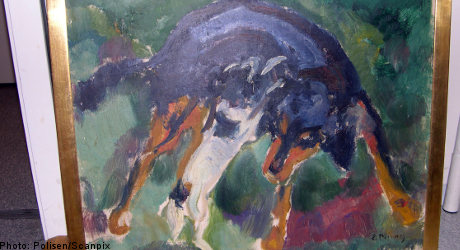 “I got a real shock when the police called me at lunchtime yesterday. You don’t think that this can happen. It is like when you have personally been a victim of a theft, you feel aggressive and offended,” said museum head Göran Christensson to the newspaper.

The Munch is worth around 10 million kronor ($1.5 million) and was found with a further two paintings by Gustaf Rydberg and Pär Siegård, according to the local Kvällsposten daily.

The raid on the museum is thought to have occurred at least two weeks ago, but was not noticed at the time. The paintings are thought to have been held in a storehouse, a form of holding bay between the exhibition and the main store.

“Neither I nor our staff can explain how this could have happened,” Christensson said. “But the police have not complete an examination of the scene yet, so it remains very unclear to me. But one wonders what type of people have done this.”

The Munch painting “Two friends” portrays two dogs and is thought to originate from 1913 when the Norwegian painter was living in Germany and is Malmö Museum’s only work by the artist.

Munch’s perhaps most famous work is the anxiety-ridden “The Scream” and his works have been sold for around 200 million kronor.

Christensson said that an internal inquiry into the incident is also underway and security routines are set to be reviewed to see if any improvements can be made. An extra inventory is being conducted to check to see that no more paintings are missing.

The valuable paintings were found in connection with a police investigation into a case concerning credit card fraud in the taxi sector.

“When we conducted the raid, we found three paintings in plastic bags in one of the rooms,” said Magnus Nilsson at Malmö police.

On the back of the paintings there were found labels with the text “Malmö Art Museum”, while raised police suspicions, especially as no thefts had been reported.

A 34-year-old man has now been arrested on suspicion of receiving stolen goods, but police were unwilling to divulge what the man had said regarding the paintings.

Police estimate that the paintings were stolen sometime after August 1st.