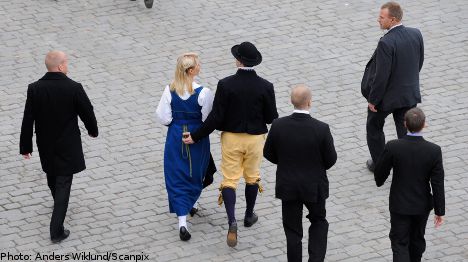 Party leader Jimmie Åkesson and the rest of the Sweden Democrat members of parliament stormed out of the church on Tuesday afternoon after bishop Eva Brunne began to speak about racism and xenophobia.

“The racism that says that you don’t have as much worth as I do; that you shouldn’t have the same rights as me; aren’t worthy of living in freedom, and that is the only reason – that we happen to born in different parts of our world – that is not worthy of a democracy like ours to differentiate between people,” said the bishop.

Åkesson refused to comment on his party’s decision to leave the church, indicating that he was too upset to say anything.

However Sweden Democrat MP Kent Ekeroth told the Expressen newspaper why he and his colleagues left the church during the bishop’s sermon.

“The church just couldn’t refrain from agitating against the Sweden Democrats. We left the church in protest,” he told Expressen.

After Åkesson had regained his composure, he said the bishop’s speech was clearly inappropriate.

“It was quite clearly an attack against us,” said Åkesson, pointing out that Monday night’s demonstration against racism in Sergels Torg was also mentioned in the speech.

“There (at Sergels Torg) they called for me to be deported.”

Göran Hägglund, leader of the Christian Democrats, was sitting in the same row as Åkesson and the other party leaders. He was highly critical of the Sweden Democrats’ reaction.

“It’s very inappropriate to do it in that way. The bishop was talking about how all people have equal value and to get up from their seats and march out at that moment like they did in a clear demonstration shows quite clearly what sort of basic views they have,” Hägglund told TT.

“It’s one of the biggest breach of etiquette I’ve ever seen,” said Johan Pehrson of the Liberal Party (Folkpartiet).

Åkesson said that the decision to leave the church was a spontaneous one that wasn’t discussed ahead of time.

“What we did in the church was very spontaneous. I’m very surprised by the bishop’s speech and I’ve even been active in church politics for a long time,” he said.

Erik Almqvist, the Sweden Democrats’ press secretary and newly elected member of parliament, wrote on his Twitter account, “Offensive politicized church which takes the position of the leftist extremists.”