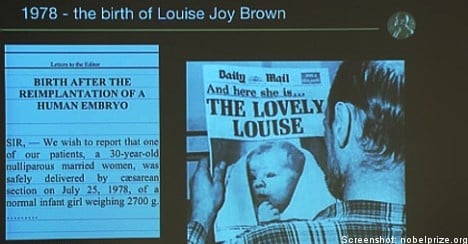 In awarding Edwards, an 84-year-old British researcher, the 2010 Nobel Prize in Physiology or Medicine, the Nobel Committee called his pioneering work in the field of in-vitro fertilization (IVF) “a milestone in the development of modern medicine”.

Working with colleagues at the University of Cambridge, Edwards helped perfect methods for fertilizing human eggs outside the human body.

“His achievements have made it possible to treat infertility, a medical condition afflicting a large proportion of humanity including more than 10 percent of all couples worldwide,” the Nobel Committee said in a statement.

“A new field of medicine has emerged, with Robert Edwards leading the process all the way from the fundamental discoveries to the current, successful IVF therapy.”

Edwards’ work, carried out together with research partner Patrick Steptoe, ultimately resulted in the birth of the first “test-tube baby”, Louise Joy Brown, who was born on July 25th, 1978.

The roots of Edwards’s eventual success with IVF began back in the 1950s when he began working on the biology of fertilization.

Through his work, Edwards began to realize that fertilization outside the body could represent a possible treatment of infertility, inspiring him to explore the possibility of fertilizing human eggs in test tubes, something which other scientists at the time had shown was possible using eggs and sperm from rabbits.

However, it wasn’t until 1969 that Edwards and his colleagues were able to successfully fertilize a human egg in a test tube. But the fertilized egg didn’t survive past the first cell division.

In overcoming the challenge, he turned to Steptoe, a gynecologist, in hopes of finding a safe way to extract eggs which had had a chance to mature in the ovaries.

Edwards and Steptoe eventually started the Bourn Hall Clinic in Cambridge, the world’s first centre for IVF therapy, with Steptoe serving as its medical director until his death in 1988.

According to the Nobel Committee, approximately four million individuals have been born thanks to IVF, which it cites as “probably the best evidence for the safety and success of IVF therapy”.

Edwards was born in Manchester, England in 1925 and after military service took up the study of biology at the University of Wales in Bangor and at Edinburgh University in Scotland, where he received his PhD in 1955 with a Thesis on embryonal development in mice.

He joined the University of Cambridge in 1963, eventually serving as the research director of the Bourn Hall Clinic.

The awarding of the Nobel Prize in Physiology or Medicine marks the first of a week-long stretch of announcements of who will receive prizes named in honour of famed Swedish industrialist Alfred Nobel.