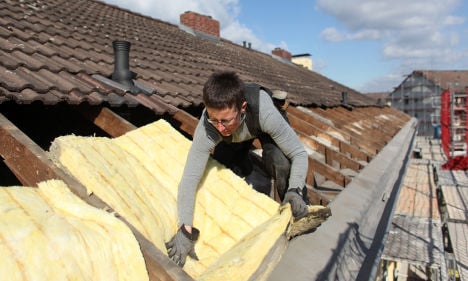 A worker installs insulation in a file image. Photo: DPA

The new insulation in homes is indispensable in the fight to protect the climate, the chancellor told daily Süddeutsche Zeitung.

“Naturally not everyone will think this is good at first glance, but it makes sense that such an investment in the future is worth it for both the landlord and the tenant,” she said, adding that renters would benefit from lower energy costs in the long term.

In addition to preparing the country for bigger rent payments, Merkel defended her centre-right coalition’s new energy and climate protection plan, which the cabinet passed on Tuesday.

Under the plan, nuclear power will remain part of Germany’s energy supply until at least 2036 with a controversial extension of atomic reactors’ lifespans that has been heavily criticised by the opposition and environmentalists.

Her coalition did not allow itself to be manipulated by the atomic energy industry as some have alleged, she said. Instead companies “didn’t take part at all in many main decisions for good reasons,” she explained.

The important thing for Germany is that “we really advance on the way to the period of renewable energy,” she said, adding that she feared “many people dream of wind and sun energy but are not ready to support the fundamental reconstruction of our infrastructure for our goals.”