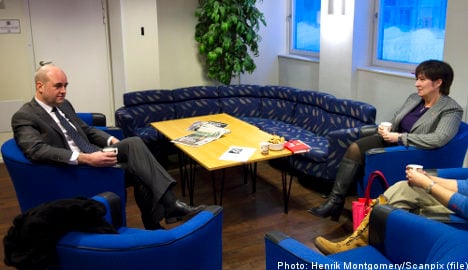 According to Sahlin, Reinfledt told her he planned to forge ahead as leader of a minority government.

Sahlin added that the concrete issue on which the two discussed potential cooperation was refugee and asylum policy.

“It’s appropriate for the democratic parties to hold discussions on these issues,” Sahlin told the TT news agency.

She said that Reinfledt would get back to her with the outlines for a possible cooperation.

The Social Democratic leader, whose party is still reeling following a stinging election defeat, welcomed the approach from Reinfledt, viewing it as a sign that he wants to work toward to form a broad consensus on Sweden’s asylum and refugee policies.

“It’s an important signal to send, both internally in the Riksdag and outwardly to the Swedish people, that we aren’t going to put ourselves in a situation like the Danes did, where it was precisely in these questions which the xenophobic parties exerted their influence,” said Sahlin.

She added that the Red-Green coalition plans to present a common budget proposal, but the matter has not yet been fully decided.

“We’re holding talks now. My starting point is that it would be quite good to have a common proposal,” Sahlin said.

Meanwhile, Green Party spokesman Peter Eriksson clarified that his party’s plans for working with the centre-right Alliance government are limited to asylum and refugee policies and do not include the future of the Swedish military presence in Afghanistan.

According to Eriksson and Sahlin, the Red-Green opposition plans to present a common bill in the Riksdag concerning Swedish troops in Afghanistan which will be based on a Red-Green agreement that they want a troop withdrawal to commence in 2011.

Eriksson admitted that the proposal could cause problems for the government because the Sweden Democrats also want to wind down Sweden’s military intervention in Afghanistan.

“But we can’t give up on pushing our own policies simply because the Sweden Democrats want the same thing,” said Eriksson.

The Centre Party was expected to release details on their views about the forming of a new government on Tuesday afternoon. Party leader Maud Olofsson said that she and the party are ready to give up the post of deputy prime minister, a post which Olofsson has had in addition to her responsibilities as enterprise minister.

According to Olofsson, the Green Party’s contacts with Reinfeldt about cooperating on refugee and asylum policies reveal how the party is thinking.

“They are obviously prepared to abandon the Red-Green coalition,” said Olofsson.

Olofsson thinks it’s now up to the Red-Green coalition and Mona Sahlin to determine what sort of influence the Sweden Democrats will have in the Riksdag.

“It’s only if the Red-Greens strike an agreement [on the issue] that the Sweden Democrats will have an influence,” Olofsson said.