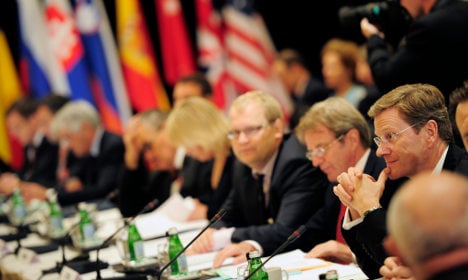 “Disarmament and nuclear non-proliferation is of no less importance for humanity than our fight against climate change,” Westerwelle told public broadcaster ZDF while in New York for a United Nations summit.

He said Germany, which is currently campaigning for a non-permanent seat on the UN Security Council, was concerned about the growing number of countries around the globe armed with nuclear weapons. This, in turn, increased the likelihood that terrorists would one day get their hands on an atomic bomb.

“This would be a huge endangerment of humanity’s safety,” he said. “That is why German foreign policy is not just one of peace but is also focused on promoting disarmament and nuclear non-proliferation.”

Westerwelle on Wednesday evening announced a new initiative with nine other non-nuclear nations – including Japan and Australia – to push for a world free of atomic weapons.

Germany is currently seeking a spot as one of the ten non-standing members of the UN Security Council for the next two years. But unlike the five permanent members of the Council – the United States, Britain, Russia, China and France – Germany would not be granted veto power.

Winning a non-permanent seat requires securing two thirds of the vote from the 192 members of the UN on October 12. Two other nations, Canada and Portugal, are competing against Germany for the spot.

Westerwelle’s boss Chancellor Angela Merkel kicked off the German charm offensive earlier this week during her visit to New York by working to win the support of the African UN members. With Germany the UN’s third-largest donor, she attempted to underline Berlin’s importance on the world stage and its role in pushing for the achievement of the UN Millennium Development Goals.

Germany has long advocated a complete overhaul of the UN Security Council structure, along with Brazil, Japan and India.