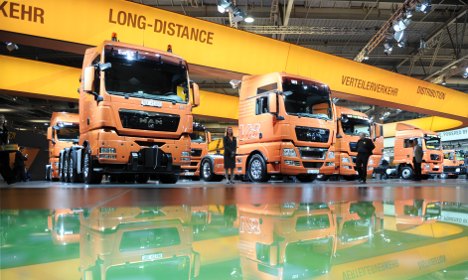 And to the dismay of environmentalists, makers of these new 25-metre (82-foot), 60-tonne articulated behemoths say they are a greener alternative to the shorter trucks now plying European roads.

“They are of interest to our clients and to society in general,” Fabrice Piombo, a spokesman for Renault Trucks, told news agency AFP at the IAA Commercial Vehicles fair in Hannover, which runs to September 30.

Such trucks, also known as Longer and Heavier Vehicles (LHVs) or Gigaliners, already roar along roads in the United States and Australia, but other than in the Netherlands, Finland and Sweden, they are outlawed in Europe.

In most European countries, where roads tend to be narrower and more sinuous than the other side of the Atlantic or Down Under, lorries are generally not allowed to be longer than around 16.5 metres and to weigh more than 40 tonnes.

But with EU governments seeking ways to cut their carbon dioxide emissions, companies like Volvo Trucks and MAN say their monsters could move goods around the continent with less fuel and less pollution.

“It improves transport efficiency and fuel efficiency and you need fewer drivers,” Lennart Pilskog, director of public affairs at Volvo Trucks, told AFP. “The whole industry is with us.”

MAN, which is taking part in nationwide trials of monster lorries in its native Germany in 2011, has even dubbed its aerodynamic MAN Concept S prototype, unveiled in Hannover, the “Dolphin.”

The truck can offer a 25-percent reduction in fuel consumption and in carbon emissions – provided, that is, that European regulations are changed and vehicles get longer, the firm says.

But environmental pressure groups and supporters of more European freight being transported by rail are unimpressed, and opponents have clubbed together to form the “No Mega Trucks” pressure group.

“Longer and heavier vehicles are a danger to the safety of all road users. LHVs will damage the environment because they will lead to more truck journeys,” according to the group’s website www.nomegatrucks.eu.

“And they will cost taxpayers billions of euros because Europe’s roads were not designed for such monsters. In short: mega trucks are dangerous.”

Martin Roggermann from the German Pro-Rail Alliance says monster trucks would mean less investment in rail freight and more traffic, and that companies’ claims to want to do their bit for the environment is nonsense.

But Volvo’s Pilskog says that opponents’ fears are unfounded.

“In Holland there was no effect on rail transport,” he says.