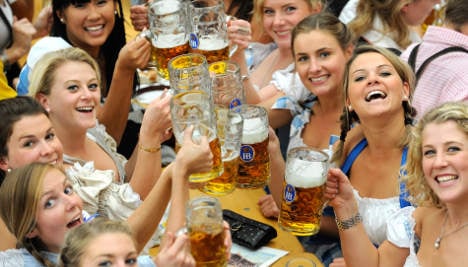 Though some 6.6 million Maß, or litres of beer, are consumed at Oktoberfest each year, they amount to just 1 percent of annual production from Munich’s leading breweries.

“I can drink beer anywhere, but here it’s a way of life. That’s what people want,” says Manfred Newrzella of the Association of Munich Breweries.

For the breweries allowed exclusive access to the Wiesn, Oktoberfest is undoubtedly the most important date on their calendars, a chance to promote their brand not just in Munich but on the world stage.

“Oktoberfest is an enormous customer event,” Newrzella says. “It’s like an in-house exhibition.”

A festival rule dating back more than a hundred years allows just six breweries sole access to the Wiesn. At the time, local business owners couldn’t afford to continue funding the festival, which celebrates its 200th anniversary this year, and asked for help from the local breweries. This was granted in exchange for the creation of a rule – that only breweries inside the old city walls that surround the city centre could serve the beer.

Despite being the smallest in size, Hofbräuhaus has the largest turnover, with its one hundred employees producing more than 250,000 hectolitres of beer and €34 million in profit. Yet only 6,000 hectolitres are sold every year at Oktoberfest.

But the Hofbräuhaus tent greets up to 30,000 visitors each day during Oktoberfest, and their impressions are the key to forming the image of Munich’s beer as traditional and unique, something which cannot be imitated by any of their larger competitors and the cornerstone of their business.

“Oktoberfest is the most important PR event that one can imagine,” Hofbräuhaus spokesman Stefan Hempl says.

One-third of the brewery’s production is exported overseas, as far away as Las Vegas, Shanghai and Dubai. They also have a licensed brewery in the US state of Kentucky, England and Hungary. About half of their sales come from abroad.

Such international sales are crucial because even the largest Munich breweries are dwarfed by larger national and international counterparts, notably the American-Belgian market leader AB InBev which produces 359 million hectolitres of beer annually.

Even Radeburger, Germany’s largest brewery, ranks a feeble 22nd place behind others from the Mexican and Chinese markets, although they still produce twice as much as all the Munich breweries combined.

Thus Oktoberfest’s unique marketing opportunities have inspired outsiders to fight the city’s exclusive club of Wiesn breweries. Prince Luitpold, the great-great grandson of the last Bavarian King, Ludwig III, pursued an unsuccessful campaign to abolish the strict rules and access Oktoberfest sales for his famous northern Bavarian brewery Schlossbrauerei. But in 1990 a Munich court rejected his case, insisting that “Oktoberfest is a festival exclusively for Munich beers.”

Meanwhile the Tucher brewery, owned by the Radeberger group, even attempted to find a legal loophole one year by piloting an advertisement on the side of a Zeppelin over the Wiesn only to be shut down by police concerned about security risks.

Not surprisingly, the Munich breweries are keen to preserve their exclusive rights to the festival.

“We are of the opinion that as a traditional local festival, that only breweries from the town should be allowed to supply the beer,” says Lothar Ebbertz leader of the Bavarian Brewers’ Association.

Munich’s Oktoberfest runs from September 18 until October 4 this year. A special historical area offers old carousels, special beer and other attractions for the 200th anniversary celebrations.

+M%FCnchen&dbkanal_004=L01_S02_D001_KPK0036_oktoberfest_LZ03″ target=”_blank”>Sponsored link: Travelling to Oktoberfest? Get there with Deutsche Bahn.