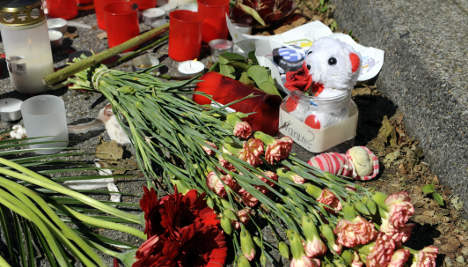 The 41-year-old woman first knocked her son unconscious and then smothered him with the bag, police in the southwestern German town announced.

After she killed her ex-partner and son, and then apparently caused an explosion in their apartment, Sabine R. went to a nearby hospital where she murdered an orderly and seriously wounded a policeman. Other officers responding to emergency calls shot her 17 times, killing her, according to the autopsy.

The father of her child died from two gunshot wounds, one to the head and the other to the neck. Investigators told news agency DPA that both father and son were found lying side by side on a bed.

After leaving the apartment, the woman, a recreational shooter, went to the neighbouring St Elizabeth Hospital with a legally owned 22-calibre sports pistol and a knife.

There she shot a 56-year-old orderly three times in the head and neck and stabbed him in the upper body several times.

In total, 18 people were injured during the rampage, including those hurt in the explosion in the apartment building.

What precisely triggered Sabine R.’s rampage is still not clear, though some media have reported that she had argued with her ex-partner, possibly about custody of their son. Colleagues and people who knew her said Sabine R. had become increasingly distressed and embittered, the Badische Zeitung reported Tuesday.