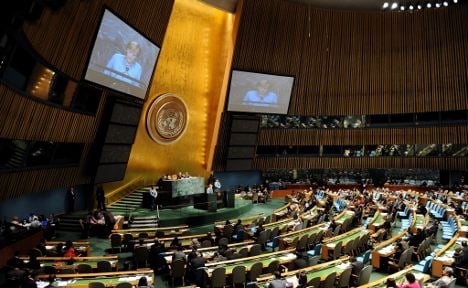 She also said the United Nations had to accept that efforts to eliminate poverty and hunger had fallen short of the Millennium Development Goals set a decade ago.

Germany is the world’s third largest aid donor and Merkel said there should be more “results-based financing” to poorer nations who have demanded greater financial aid from the industrialised world at the summit.

“There is one thing we have to accept. The primary responsibility for development lies with the governments of the developing countries,” Merkel said.

“It is in their hands whether aid can be effective. Therefore, support to good governance is as important as aid itself.”

Merkel insisted that development assistance “can, apart from emergency situations, only be a contribution to national resources, never a substitute for them.

“Development aid cannot continue indefinitely. The task therefore is to use limited resources as effectively as possible. This can only work through good governance which taps that country’s potential.”

The German chancellor also called for greater efforts to promote a market economy and small businesses.

“Without self-sustaining economic growth, developing countries will find the road out of poverty and hunger to steep to climb.”

Merkel also made a new plea for reform of the United Nations, to back Germany’s case for a place on the UN Security Council.

“It is up to us, the member states of the United Nations to make the UN fit for the challenges of this century,” she said, highlighting Germany’s role as the third biggest contributor to the UN budget.

“For that reason Germany will continue to work resolutely for UN reform,” she insisted.

Earlier on Tuesday, German Development Minister Dirk Niebel admitted that Germany was behind on its development goals, but said the country should be realistic about foreign aid funding following the global financial crisis.

“We are momentarily not within the plan, that is right,” the pro-business Free Democrat told broadcaster Deutschlandfunk, adding that the measuring rod should be adjusted.

This year Germany has managed to give just 0.4 percent of its gross domestic product (GDP), but would maintain its goal to reach 0.7 percent by 2015, he said.

“Only I don’t believe it is sensible or realistic to finance it all with tax revenue,” he told the broadcaster, pointing to the government coalition’s contract, which had included plans to us half of its revenue from CO2 emissions trading credits for development aid.

Niebel also said the country should mobilise funding from private businesses and organisations.