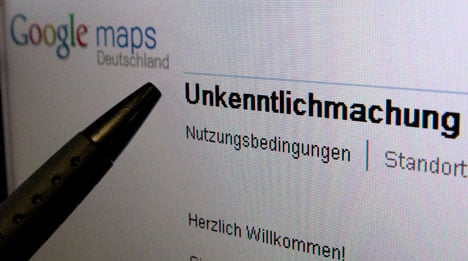 Ahead of an October 15 deadline, “several hundred thousand people” have told the Internet giant that they do not want their home or business to be visible on Street View, which features panoramic still photos taken at street level.

Der Spiegel cited sources close to Google, which in August said it expected tens of thousands of tenants and owners to respond to its offer, unique to Germany, to pixel out buildings before images are published.

The Consumer Affairs Ministry had expected applications for more than 200,000 addresses.

Google presented plans last month to roll out images from 20 German cities on Street View later this year. The service is already available for more than 20 countries worldwide.

But the announcement triggered an outpouring of security and privacy concerns in a country particularly sensitive to such issues due its experience with the Nazi and communist regimes.

Johannes Caspar, the top official for data protection in the northern city of Hamburg, where Google’s German unit is based, said he had the impression that the company was respecting citizens’ wishes.

But he told Der Spiegel he wondered whether “Google can process such a storm of applications correctly.”

The German government is weighing new laws on online data protection in the wake of the debate over Street View and will hold a high-level meeting on Monday in Berlin chaired by Interior Minister Thomas de Maiziere.