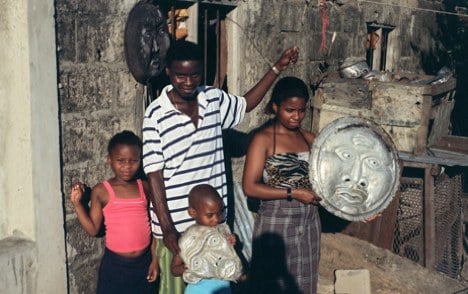 But his memories of friendships abroad and walking in the snow are scant comfort now. Like most of the 15,000 Mozambicans sent to work in East German factories, Amade said he has never been paid his full wages.

“When I see those pictures, the emotion is enormous, it is big. It is the size of the world. Because no one’s story is the same,” the 41-year-old said.

While in East Germany, the Mozambicans were paid only 40 percent of their salaries, they say. They were told the rest was sent to Mozambique for investment and pay-out upon their return.

But after the Berlin Wall fell in 1989, the labour pact ended and they were sent home to a nation that was still a Cold War proxy battlefield. They received only about $350 dollars (€270) each.

The Mozambicans in East Germany worked in steel, construction, manufacturing and textiles industries from 1979.

Locally they’re known as the MadGermans, meaning “those from Germany” in the Shangaan language.

“It’s pejorative,” MadGerman Association president Zeca Cossa said from their base at a park across from parliament in the Mozambican capital Maputo.

“We were there to learn these trades to build Mozambique. Then we returned and we were all unemployed. They told us ‘We don’t have money’,” said Cossa.

He believes the group was sent to repay East Germany for the weapons sold on credit to liberation party Frelimo during Mozambique’s fight for independence against Portugal from 1964 and during the civil war that ended in 1992.

“We didn’t go to train. We went there to work off Mozambique’s debt,” he said. “We were used like slaves.”

The MadGermans’ situation reflects nagging problems that remain in the country, one of the world’s poorest, after the 16-year civil war that pitted the communist Frelimo government against rebels supported by apartheid South Africa.

Despite the economy’s projected 6.5 percent growth this year, 60 percent of Mozambicans do not have work.

But the MadGermans see more sinister reasons behind their failure to build a life in their home country. They say the government, the nation’s biggest employer, refuses them work because they demonstrate for their rights.

“Most Africans don’t see. Even when they do see, they don’t speak,” said Cossa. “We who were in Europe can see.”

“But in Mozambique, if you talk, they kill you,” he said, referring to a demonstration in 2003 when police shot dead one of the group.

Every Wednesday around 300 MadGermans march through the city’s streets. Earlier this year they even attempted to storm parliament.

However, the group’s reputation as troublemakers complicates finding a job anywhere. “Even when you work, when they find out you’re a MadGerman, you lose your job,” said Rose Ester Libombo, who worked in a lamp factory in Erfurt for two years.

“When they find out, they think you could make a noise, because we insist on our rights. They call us marginalised, confused,” said Libombo.

These days she sits waiting in the dusty park with other MadGermans in the shadow of a tattered German flag hanging off a tree stump, while street vendors dodge the refuse and heaps of ash as they ply their trade.

Asked about the way forward, Libombo smiles faintly. “I don’t have plans. You need money to make plans,” she says.