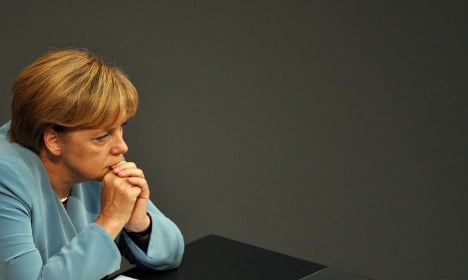 This week, Angela Merkel spent considerable effort addressing concerns that her Christian Democratic Union (CDU) was ignoring its conservative base at its own peril.

But the founding of a new right-wing party in Germany would likely help more than hurt the CDU. Firstly, there is a good chance that such a political outfit would quickly destroy itself, torn apart by its few decent supporters and whole droves of fundamentalist crazies with religious or reactionary agendas.

Secondly, it would be a blessing in disguise for the CDU, because it would finally have a recognizable opponent to its right. Nothing helps to define a political agenda, and inspire confidence, more thoroughly than a tangible opponent.

This is because the problem of the CDU is rooted in its own intangibility. Every year, a diffuse uneasiness breaks out. The causes are always different, but it always ends with the same complaint: the CDU – and especially its leader Merkel – are neglecting the party’s conservative core.

Merkel then has a talk with the Catholics, the World War II expellees or whichever group happen to be causing the fuss this time, and the party’s general secretary then organizes a big family meeting. But none of it helps. The uneasiness just stays dormant until the next eruption. It’s even becoming apparent in opinion polls: the current lows around 30 percent mean that not only are casual supporters embarrassed to be associated with Germany’s largest governing party, but core conservatives are also turning away from it.

This quiet exodus is much more dangerous than any new right-wing party would be. If you ask a leading CDU politician what they are doing about this, you usually get a passive-aggressive question in return: what do you actually mean by “conservative” anyway? For or against nuclear power? For or against a mega-railway station in Stuttgart? For women in the kitchen, or for saving the family by trying to make sure men and women have time to work and have children?

It really is difficult to find a clear definition, but it would be wrong to therefore conclude that the “conservative” doesn’t exist, or doesn’t exist anymore. We used to be able to describe a clear set of conservative opinions, attitudes and behaviour – now it is just a diffuse feeling. But it is a mentality that is very widespread – at least as a sort of prosaic conservatism; the kind that sees railway ticket machines not as progress, but as an imposition.

Now the central task of our politicians is to find new ways to counter this persistence. It might be some comfort for Angela Merkel that no-one was more loathed by true conservatives that the provincial modernizer Helmut Kohl. And it’s true that a few of these conservatism rows are started by people who have their own selfish careerist interests at heart. But that does not diminish the significance of these debates. The art of politics also means being able to keep your own traditionalists on side.

And keeping them on side means taking them seriously. But that doesn’t mean creating special programmes for dwindling traditional lifestyles like paying stay-at-home mothers not to send their children to day care. It does not mean lip service in party platforms, and it does not mean cultivating high-profile conservative personalities. In fact, taking the CDU’s right-wingers seriously is less about concrete measures than a vague feeling.

For example, nothing offends the conservative sensibilities more than watching the current centre-right government go about its business so ineptly. On the other hand, nothing could be more satisfying than the impression of assertive leadership.

That is why someone like Defence Minister Karl-Theodor zu Guttenberg currently has a very good chance of abolishing something as close to the conservative’s heart as Germany’s military conscription. And, as paradoxical as it might sound, Angela Merkel never shocked – and impressed – the conservatives more than when she threw the far-right parliamentarian Martin Hohmann out of the party in 2003.

The conservatives will never be happy: after all, they live off complaining about how terrible the world is. But they are amenable to gestures, to understanding and to strong leadership. The CDU and its leader needn’t necessarily pursue conservative policies, but they do need to pursue their policies conservatively.