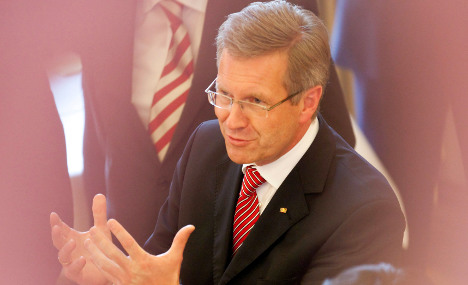 “We are looking into this state of affairs,” a spokeswoman for the Bundestag lower house said late on Thursday.

The inquiry came after a newspaper reported that while campaigning for re-election as premier of Lower Saxony, Wulff had used the services of a spokesman on the payroll of a public utilities company for several years.

Daily Leipziger Volkszeitung also said that official cars, mobile phones and computers were used improperly and that prosecutors in Lower Saxony had also opened a probe.

The public utility company, Stadtwerke Wolfsburg, “will have lost €400,000 through this moonlighting,” Thomas Oppermann, a senior member of the opposition Social Democrats, told the paper.

If the affair deepens, it could come back to hurt Merkel, who had Wulff installed as president earlier this year as a safe pair of hands after his predecessor Horst Köhler quit over criticism of his remarks about Afghanistan.

Merkel’s opinion poll ratings have fallen sharply since winning a second term in office last September amid squabbling in her ruling coalition of conservative Christian Democrats and the pro-business Free Democrats.