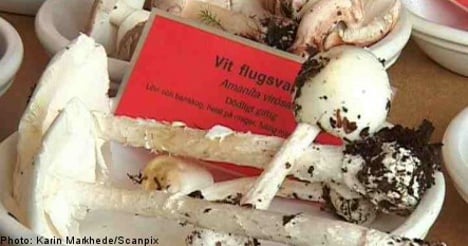 “They could have died,” said Urban Säfwenberg, at the emergency healthcare services to broadcaster TV4 Nyherterna Uppsala.

The Thai students headed out to the woods to do what many Swedes do at this time of the year, namely go mushroom picking. Aware that there are a myriad of more or less edible varieties to chose from, the group took a book detailing Sweden’s mushrooms with them, but it seems they still made a near fatal mistake.

When the students came home they prepared a dish with what they thought were edible mushrooms but are likely to have been death cap mushrooms, and proceeded to eat their meal. Soon after the group began complaining of stomach cramps and diarrhea.

“As it could be a case of poisoning we have taken all ten in for care. Early intervention can be decisive to prevent fatalities if it concerns a death cap or fly agaric mushroom,” said Säfwenberg.

The hospitalised students have confirmed that they suspect that they did in fact eat some of the deadly mushrooms.

2010 has proven a bumper year for mushrooms in the Swedish forests and the number of cases of mushroom poisoning has risen dramatically in comparison with last year. The cases almost always concern a death cap or fly agaric mushroom.