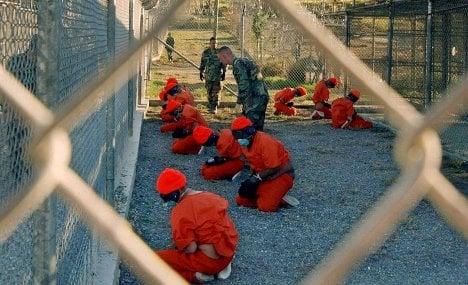 In July, after months of deliberation, Germany agreed to accept the pair in response to US President Barack Obama request for allies’ help to close the prison in Cuba.

“The two former Guantanamo prisoners have now arrived in Germany,” de Maiziere said in a statement, adding that they touched down “in the middle of this week.”

The first, a stateless 34-year-old man of Palestinian origin, landed in Hamburg in northern Germany. The second man, from Syria, arrived in the south-western region of Rhineland-Palatinate.

“The regional authorities concerned have promised to do everything to allow the two people a new start in Germany,” said de Maiziere.

Both had expressed the wish not to be hounded by the media, he added. “After nearly nine years in Guantanamo, this is understandable and we should all respect this,” the minister said.

The Palestinian was detained in 2001 in Afghanistan and has been interned without charge in Guantanamo since 2002. He has expressed a desire to raise a family in Germany, said regional authorities in Hamburg. He will not be under police supervision, they added. Officials in Rhineland-Palatinate provided no details about the second man.

Late last year, the United States asked Germany to take in three detainees. A German delegation travelled to Guantanamo in March and spoke with the men. On the basis of these interviews, de Maiziere said he accepted two but rejected the third candidate, giving no further details.

Marianne Heuwagen of Human Rights Watch Germany commended the decision in July 2010, saying that she hoped that other countries would follow Germany’s example.

Berlin’s decision followed months of heated public debate and de Maiziere said at the time that Germany has no intention of accepting further detainees. US President Barack Obama pledged to shut down the military prison by January after it became a symbol for excesses in the US war on terror.

Washington has asked allies to help resettle prisoners who have been cleared of all charges but cannot return home, often over fears they may be tortured. However, their reluctance has been a key obstacle in closing the site.