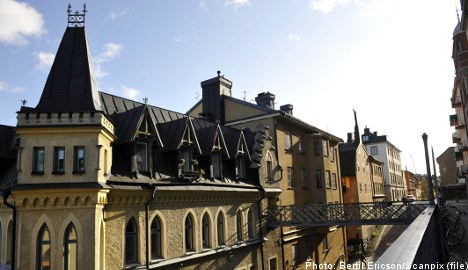 So far, sites in central Stockholm and the nearby archipelago have been confirmed, as have locations in Uppsala in eastern Sweden, according to the TT Spektra news service.

“They’re going to remake building facades and streets on parts of Drottninggatan. It’s supposed to look like it did in the 1960s. Therefore, we’ve given permits to place work trucks and such on the street,” Karin Åkerström of the Uppsala police told TT.

The filming is likely to cause some traffic headaches for Uppsala residents, with bus service on Drottninggatan set to be rerouted for at least a month.

In addition, an estate outside the town of Katrineholm, located about 140 kilometres southwest of Stockholm, is a likely location for filming scenes in the Hollywood remake of the first installment of Stieg Larsson’s Millennium trilogy.

According to the Katrineholms-Kuriren, the Hofsta säteri estate, with roots back to the 1300s, will serve as character Henrik Vanger’s compound on the outskirts of the fictional town of Hedestad in “The Girl With The Dragon Tattoo.”

“We’re preparing for filming to start in October, but it’s not 100 percent finished,” Malte Forssell, the film’s Swedish producer, told the newspaper.

Film crews are also set to descend on locations in Hälsingland province in eastern Sweden, including Bollnäs, as well as Gävle and Söderhamn.

A number of scenes will also be shot in central Stockholm and at three locations in the city’s archipelago.

Fans hoping to catch a glimpse of Hollywood stars like Daniel Craig, Rooney Mara and Robin Wright, will probably have the greatest chance of doing so near the Mariatorget neighbourhood on Södermalm or near the Stockholm Courthouse (Rådhuset).

While preparations are already underway for filming, expected to begin in early October, Swedish members of the film crew remain tight lipped about where exactly the new “Dragon Tattoo” movie will be filmed.

“We can’t say anything, so I can’t confirm or deny that we’re going to film in Uppsala,” said Jonas Rydegren with the Swedish film company assisting Sony with the production.