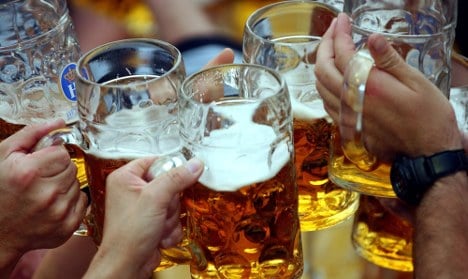 For all Bavaria’s proud Catholicism, its defining cultural event is an immensely atheistic celebration of beer, meat, felt hats and brass bands.

Unlike Germany’s other major folk festival – the Rhineland’s Karneval – Oktoberfest is not rooted in any Christian ritual. Instead, it started life as a royal horse race at which the Virgin Mary was, if anything, noticeable by her absence.

When that race was run exactly 200 years ago to celebrate the union of two minor and now largely forgotten European bluebloods, the adoring crowd needed to eat, so they had the event catered. This afterthought went on to become a global icon for revelry and beer worship.

Today’s Oktoberfest might be drowning in tourist-pleasing kitsch, but all its customs are based on the basest human instincts – which is probably why so many countries have so enthusiastically adopted and adapted it.

It’s become the world’s favourite excuse to get drunk, and it has irrevocably formed the world’s image of the Germans. The rest of the country might shudder at the thought of being considered Bavarian, but Oktoberfest is undoubtedly Germany’s greatest cultural export.

The honour of being the biggest non-German Oktoberfest is much contested – but if you’re measuring by the number of participants, then it’s a tight knee-slapping competition between the Blumenau Oktoberfest in Brazil and the Kitchener-Waterloo Oktoberfest in Canada.

Both boast an attendance of around 700,000 – 800,000 every year, but Blumenau probably deserves it on length alone – 18 days, two stomach-splitting days longer than even the original. And Blumenau is just that bit more, well, German than its rivals too. “Bands performing must suit 90 percent of their show to the musical style determined,” the promotional material warns. We have ways of making you oompah.

Ties to the Fatherland

Like many Oktoberfest celebrations abroad, Blumenau exists to pay homage to the community’s German roots. The town was settled in 1850 by German immigrants, who, as any self-respecting expats would, did their level best to turn their corner of the rainforest into a version of the Fatherland. When the Oktoberfest was born in 1984 in the wake of a devastating local flood, it took on the form of a community-binding event.

The biggest US Oktoberfest is Zinzinnati, in – yes – Cincinnati, Ohio. After starting life as a block party in 1976, it now it attracts half a million people every year and features the “Gemütlichkeit Games” (a beer stein race and a beer barrel roll) – as well as the slightly nightmarish vision known as “The World’s Largest Chicken Dance.”

Here too the Germanic origin of many Cincinnatians was the abiding factor in its inception, as spokesman Chris Kemper explains: “Suffice it to say the people of Cincinnati have always felt a certain kinship with the people of Germany. The cultural heritage is very strong and evident. In fact, an area of downtown is called Over the Rhine because the immigrants from Germany thought the area reminded them of home.”

But the Oktoberfest does not need a Germanic bloodline to flower and grow. The seeds of this unholy jamboree have drifted everywhere, and grown in different forms. There are now at least two major Oktoberfests in Southeast Asia, one in Hong Kong, and the other in Ho Chi Minh City, Vietnam. The latter was set up in 1993 in a large hotel by three homesick German businessmen.

In fact, stimulating business partnerships seems to be an important motivation for Oktoberfest Vietnam. “Co-organized by the German Business Association, sponsored by German businesses, and endorsed by the German Consul-General, it is a powerful showcase of Germany’s presence in and commitment to Vietnam,” the event’s marketing manager Victor Truong says. But, lest he’s making it sound like a souped-up trade fair, he adds, “The event brings locals and expatriates together in a spirit of friendship and cultural exchange. It’s a lot of fun.”

Staging an Oktoberfest to maintain local German traditions, or to network with German businesses, is one thing – but holding a beer-swilling shindig in a 98-percent Muslim land is a bit different. The Oktoberfest in the small Palestinian town of Taybeh began in 2005 thanks to the efforts of local brewer Nadim Khoury, who makes Taybeh, the only Palestinian beer in the territory’s only Christian village.

Amazingly, the Taybeh Oktoberfest – in a hamlet of only 2,000 – attracts 10,000 people every year. “Most times I am thinking we are absolutely crazy to stay in the highest mountain region of Palestine especially when we have all of the illegal Israeli settlements closing in on Taybeh and preparing a greater Israel,” says Maria Khoury, Nadim’s brother-in-law and Oktoberfest organizer.

Beer has a whole other meaning in Taybeh. “With God’s help we are still making the finest beer in the Middle East and feel this is our peaceful resistance,” says Khoury. Naturally, non-alcoholic Taybeh is provided for Muslim visitors.

With its hip-hop concerts and Palestinian dance performances complementing the brass bands, the Taybeh beer festival is probably one of the least traditional of the world’s Oktoberfests, but then there isn’t very much about Taybeh that is normal.

“Oktoberfest to the local residents offers a way to promote the local products and to boost the economy,” Khoury says, explaining the Oktoberfest celebration also offered a temporary escape from the harsh realities of the Israeli occupation. “It is like we cannot get to the world due to Israeli closure so we invite the world to come to us.”

“For the last five years we have been very blessed with good relationships among our Muslim and Jewish colleagues and the Oktoberfest gathers many people from diverse religious, ethnic and cultural backgrounds. Many of our Muslim friends come to sing and dance,” she says.

Back in Munich, where the kegs are being rolled in and Oliver Kahn is probably already sliding into his lederhosen, few would associate Oktoberfest with such political and spiritual significance.

Terms like “peaceful resistance” certainly seem to sit awkwardly next to the image of red-faced Bavarian men heaving their frothy steins in unison. But maybe there’s something to be said for drunken dissolution in knee-high socks after all.

Munich’s Oktoberfest runs from September 18 until October 4 this year. A special historical area offering old carousels, special beer and other attractions will open one day earlier for the 200th anniversary celebrations.

+M%FCnchen&dbkanal_004=L01_S02_D001_KPK0036_oktoberfest_LZ03″ target=”_blank”>Sponsored link: Travelling to Oktoberfest? Get there with Deutsche Bahn.