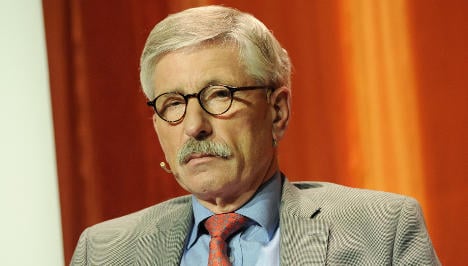 Der Spiegel magazine reported at the weekend that the office of German President Christian Wulff had intervened to achieve the increase, shortly after which Sarrazin voluntarily resigned, saving the president the unpleasant task of trying to sack him.

Sigmar Gabriel, leader of the Social Democratic Party, of which Sarrazin is a member, said he was furious at what he called a deal between the Bundesbank and the president.

“Now it seems the Bundesbank is paying Mr Sarrazin a lot of money so that he leaves. We know these methods from private business, but that does not make them any better,” Gabriel told the Bild am Sonntag newspaper.

A spokesman for Wulff told the Frankfurter Allgemeine Zeitung on Sunday that there was no such deal, but that Sarrazin would have been entitled to the extra €1,000 if he had remained to the end of his term in 2014.

In addition to income from book sales, Sarrazin will receive pension payments of around €10,000 a month according to Focus magazine, which totalled up his entitlements from his time as Berlin’s finance minister, Rheinland-Palatinate’s state secretary and a civil servant in the federal Finance Ministry.

He wrote that Germany was being undermined, overwhelmed and made “more stupid” by poorly educated, fast-breeding, badly integrated and unproductive Muslim immigrants and their offspring.

Wulff had said he wanted to see Sarrazin removed from the Bundesbank board. Although the president has the executive power over such decisions, he is supposed to be neutral in his dealings.

Gabriel also underscored his determination to throw Sarrazin out of the SPD over the weekend.

Sarrazin defended the theory of a state-driven heredity policy, said Gabriel. This is the kind of thinking that led Germany to Auschwitz, he said.

SPD secretary general Andrea Nahles also attacked Sarrazin, telling the Frankfurter Allgemeine Zeitung, “Sarrazin is spreading old genetic theories and an elitist position; he divides people into useful and useless. These views are not compatible with the fundamental values of the SPD.”

Sarrazin himself was talking over the weekend, attacking what he called the political classes yet stressing that he would not voluntarily leave the SPD.

He received support from a number of senior party members who argue it is important to tolerate debate and different ideas within the party.

“If the SPD throws Thilo Sarrazin out of the party, then I will clearly have to hold a public debate with a whole row of prominent social democrats over how our party stands in relation to freedom of opinion,” said former mayor of Hamburg Klaus von Dohnanyi.