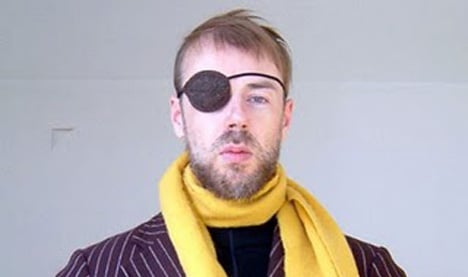 Momus, a.k.a Nick Currie, is a musician, performance artist, journalist and most recently an author. During a musical career spanning over twenty years he has been described as both the ‘anti-Morrissey’ and ‘the straight PetShop boy.’ His now-defunct blog, Click Opera, gave him an online cult following due to its highbrow subject matter and engaging writing style. Originally from Scotland, he has lived in London, Paris, New York and has been based in Berlin since 2003.

What exactly do expats provide the Berlin scene in terms of music and culture?

Well Berlin is potentially a very provincial city: it doesn’t have the same kind of immigrants as somewhere like London or Paris, and we bring the oxygen of international intellectual energy to Berlin. Berlin is not quite Germany, it’s hovering a little bit above it because it’s so well connected with other places.

It’s interesting that you used the word “oxygen” just now, because you spoke of Berlin as a creative “oxygen tent” at Exberliner’s discussion. How connected do you feel to German or to Berlin culture?

Well you get to filter exactly what you want of your own culture and just throw away what I don’t like, nothing is forced on you because obviously you’re no longer there. But you also get to filter the indigenous culture that you’re coming into so I get to pick and choose things and just throw the rest away: ‘cut and paste’. Alienation is a privilege here: I don’t read the papers here so I don’t fear crime or get angry about some politician’s speech or concern myself with it at all and to be honest I don’t feel I’m missing anything.

So how do creative expats interact with one another in Berlin?

People come here to fraternise in a laboratory kind of setting, almost like a model for future, maybe even post-industrial cultures. Berlin is a kind of cultural laboratory where the major machinery of the music industry isn’t present, so you have a lot of time to think and a certain amount of silence and a certain latitude to be experimental and meet new people: it’s all there for you.

Do you think that freedom and the cheap rent create this “laboratory environment” as you say which maybe doesn’t necessarily attract the best people, just the poorest ones or the ones who want to escape a focus on money elsewhere?

To be honest it tends to attract quite well off people, that some people find unbearable — there is that notable cliché of the braying self-entitled hipster. But I do immediately see much more interesting people the second I get on a flight to Berlin — I’m going to sound like a terrible elitist here — but I do think that some of the most interesting and creative people are coming to Berlin, and that those people do eventually add value. In a way that’s their tragedy, that paradox of the thing about moving into a poor district, making it a rich district and thus pricing yourself out of it. But the cheap rental culture that attracts people here is crucial, it’s not just a financial thing but a lifestyle thing and it’s an attitude to life that we don’t own anything but that we’re just passing through, that we can improve things while we’re here.

How does this environment alter people’s creative output then?

Berlin was able to give me a certain freedom but also a stability, it’s a bit like going to university — you don’t go to study, you go to get a certain intellectual breathing space to think about life and look at all the different things that you can do. There is a kind of culture around design or art here where these people make things by and for themselves only. Yet people do need that self indulgence, you need to feel that smugness and sense that the world owes you a living because the world needs people to be thinking in this free spirited way you get here. But a lot of your output here depends on whether you manage to structure your time properly. You have to be quite stubborn, structure yourself and be clear about what you want to do and how that would be different if you were just working a regular commercial way. Berlin allows you to do that, to step back not just from the machinery of places like London or New York but from your own worst instincts. But to quote David Bowie, “I tried to escape LA and cocaine and me and Iggy came to this city which was the heroin capital of the world,” so potentially you could slide down this chute and just party too hard, and become a victim of your own worst instincts, it all depends on how puritanically self disciplined you are.

What interests you in terms of the kind of work that other people are making here?

In terms of consuming culture, I kind of live in a bubble within a bubble which is the Japanese world within Berlin. Or the Motto graphic design world; there’s a British artist called Will Holder who is very important there. I also like people like Stuart Bailey and James Goggin, who happens to be putting together the sleeve for my album. But they aren’t in Berlin. In terms of people here, there’s choreographer Sasha Waltz or author Julian Gough, who’s producing novels, mainly about Ireland, in the James Joyce tradition of being in exile but writing about your homeland. These are all micro worlds and you can see which cities have influenced them.

How is the creative interaction between expats and Berlin changing it as a city?

When I first moved to Neukölln I was really trying to build the image of the neighbourhood in my various ways, like in my column in Wired I tried to christen it “Neubeca”; actually people call it “Kreuzkölln” instead so I failed totally, but I was trying to make it seem like the funkiest most creative neighbourhood and it didn’t seem to go that way in the end — I think that the neighbourhood has turned. But the new and the old there don’t mix so much, it’s almost like segregation. Yet on the whole Berliners are tolerant, they realise that these creators are bringing in money from outside Berlin, and the economy needs that money.

Does this mean you’re feeling disillusioned with Berlin?

No, I’m still very much “illusioned” by it…I’m not leaving because I dislike the city, I think it’s probably the best city I’ve lived in [he is planning to move to Osaka]. I’ve spent seven years here which is the second longest time I’ve spent in any city— thirteen years in London was the longest, I got sick of it. I’ve had some happy years here and done some really great work here.

So you’re happy to keep the Berlin myth alive then?

Very much so: it’s such a big city, so there will never be a moment where it’s totally yuppified or over-refined: there will always be things here that are gritty and interesting. The mythology of a city is really helpful for unifying such a diversity of people, and I think the mythology of Berlin is that it’s such a creative, hedonistic place and everybody buys into that whether it’s the locals or the visitors.

Does the constant movement of people not just into but through Berlin mean that in a sense the city is still finding its identity creatively?

Well that is almost a cliché of Berlin but it is a city where slowly finding your identity is a creative process: that ‘unformedness’ is Berlin’s character. I think it is a shape-shifting city which seems to need us outsiders to help it do this. There is always something new here.

Would you change anything about the way that the expat scene interacts with Berlin creatively?

No, I kind of like the fact that it’s hard to sell work here, it keeps you thinking about other things than the market. I do a lot of art shows in New York and the burning desperation of artists there to compromise as soon as possible, to make work that collectors want to buy because the devil is there: you’re at the top of the mountain with the devil and he’s saying “look there’s the money, shake the tree and the money will fall on your head”. In Berlin that doesn’t happen because it can’t: all the rich people are all in Frankfurt or somewhere, and it’s just galleries here. There’s a certain kind of delay, it’s not like we’re living outside of the system but we are living at arm’s length.

Where is Berlin heading creatively?

I think Berlin is heading towards being the capital of Europe. Yet Germany has this interesting situation where it farms out the financial sector to Frankfurt and the media centre to Cologne and Hamburg so Berlin just has tourism. So Berlin will increasingly be administration, tourism and art, and it won’t price out the artists for a while. I keep hearing it’s the last days of this kind of bohemian existence but I think there’s enough vacant housing in this city for that to continue for at least another two decades maybe. You don’t have the “money people” here: Berlin likes its image of being poor and sexy and it wants to keep that.

PARTNER CONTENT
Mental health: what are the warning signs international residents should look out for?