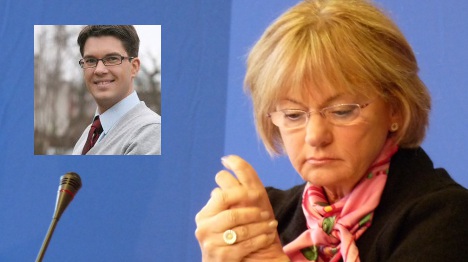 Kjærsgaard whose national conservative party has supported the Danish governing coalition of Liberal and Conservative parties since 2001, plans to visit Sweden to “experience the conditions of a Sweden election and to talk about democracy and freedom of speech”, according to a party statement.

Kjærsgaard made headlines in some Danish and Swedish media week when she criticised the Swedish press for “acting as if they were in a banana republic” following the refusal of broadcaster TV4 to send an election campaign film by the Sweden Democrats.

The controversial Danish politician does not make a habit of taking part in election campaigns in foreign countries and has previously resisted several pleas from the Sweden Democrats for help.

Social Democrat leader Mona Sahlin is on record as saying Sweden risks going down Denmark’s path if SD get into Sweden’s parliament, the Riksdag when the votes are counted on September 19th.

While DF do not hold any cabinet posts the party enjoys a close cooperation with the government parties on most issues, and has pushed through a restrictive policy line towards immigrants and potential refugees.

The party claimed 13.9 percent of the votes in the 2007 parliamentary elections after a dramatic rise in support following the Muhammad cartoons controversy in 2006.

The DF do not have any formal cooperation with Sweden’s SD nor with any other foreign far-right party but argue that the party has managed to silence its more extremist elements in recent years, becoming a more serious political party.

The Swedish police are well-prepared for the meeting in the west coast town of Höganäs.

“We have however not received any indication that there will be fights,” said police spokesperson Charley Nilsson to TT.

DENMARK
How Denmark got its children back to school so soon after lockdown
Url copied to clipboard!