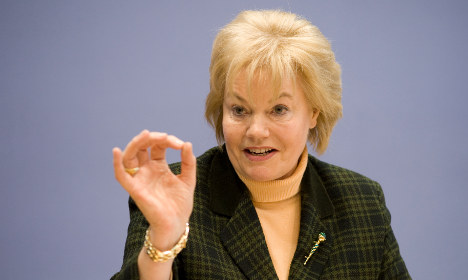 Claiming she had become an “alibi” as her party shifted to the political middle under Merkel, Steinbach said she no longer had a place in the CDU’s top echelon.

“I stand for conservatism there, but I stand ever more alone,” she said in comments to be published on the website of daily Die Welt. “My CDU isn’t on the right path. And that’s because conformity doesn’t attract voters.”

“Unfortunately, I cannot change the fact that Poland had already mobilised in March 1939,” she told Die Welt.

But she told the paper she had been “purposefully” misunderstood and she did not intend to call into question Nazi Germany’s responsibility for the war but her comments prompted a rapid statement by a senior foreign ministry official.

“I think comments that relativise the responsibility of Nazi Germany for the outbreak of World War II are very dangerous,” said Cornelia Pieper, an official in charge of German-Polish relations.

“They turn history on its head and we have to be careful that ill-thought-out statements do not weigh on relations between Germany and Poland,” she added in a statement.

Steinbach also said Thursday she had become “disillusioned” after a bruising battle to become part of a foundation for reconciliation and expulsion in Berlin earlier this year.

Steinbach, who will remain a Christian Democratic MP, is deeply unpopular in Poland for refusing to accept the German-Polish border after German reunification in 1990.