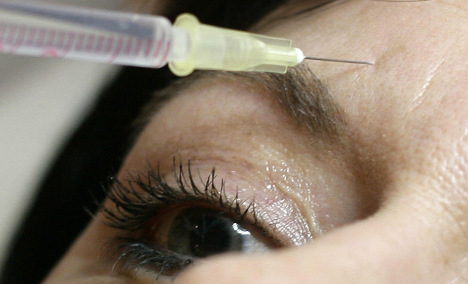 More Germans than ever before are searching for eternal youth, the Düsseldorf-based association said, citing an overall increase in cosmetic procedures of 20 percent, to reach a total of 171,000. This compared to a slight decrease of 2 percent in the plastic surgery stronghold the United States.

“The best-loved procedures are the most affordable,” GÄCD general secretary Matthias Gensior said, adding that that this may have had something to do with the recent economic crisis.

While women most often chose Botox shots to smooth their worry lines and crow’s feet, men favoured laser treatments, the organisation’s statistics showed. Women had some 130,000 Botox or other needle treatments, while men had just 14,000.

Meanwhile 43,000 laser treatments to smooth lines or remove rough patches were logged for men. Women had just 38,000 of these treatments, the GÄCD said.

Among these patients were “many newcomers,” among whom the age for first treatments had gone down from previous years, Gensior said.

The second most-popular cosmetic procedure for women was liposuction, with doctors logging some 17,000 treatments. This was followed by eye-lifts.

The fact that men had fewer invasive cosmetic surgeries is likely due to the fact that “men are not so open to surgical procedures,” Gensior said.

But women go under the knife for practical reasons, he said, naming eye-lifts as one example.

“Women can no longer properly put on make-up when they have droopy upper lids,“ he explained.