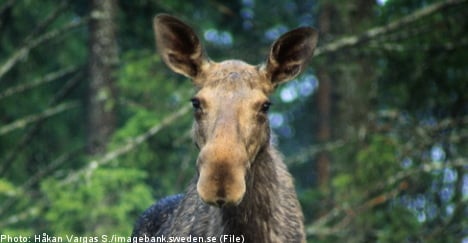 The female elk first lumbered along the backside of the Dalsjöfors health clinic before suddenly turning and smashing through two large picture windows before ending up in an inner courtyard, the Borås Tidning (BT) newspaper reported.

“I heard a big crash and went out into the hallway. Then I saw shards of glass on the floor and an elk cow in the courtyard hopping around,” clinic employees Jenny Andersson-Fekete and Evelyn Pihlman told BT.

Staff members in the adjacent pharmacy were also taken aback by the frightened beast as it lumbered around in the courtyard, just in front of an open door into the pharmacy.

“What luck that it didn’t come in here and continue through the building,” said pharmacy employee Solveig Palm.

Eventually the police and licenced hunters were called in to deal with the elk, which by that time had a large gash in its hind leg from its leap through the windows.

The injured animal was put out of its misery by Bosse Persson, a licenced hunter who took a position on the roof of the building in order to get off a clear shot.

In an odd twist of fate, Persson realized he had actually seen the female elk a week earlier after she had lost a calf in a traffic accident in Dalsjöfors.