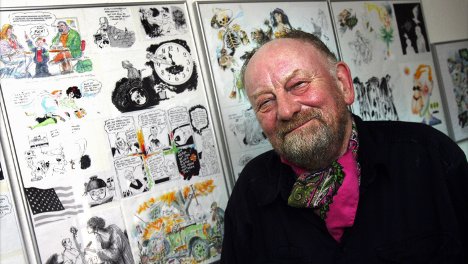 Kurt Westergaard, who was in Germany to receive the M100 Media Prize 2010, made his remarks to the Thursday edition of the daily Kölner Stadt-Anzeiger, according to an advanced publication.

“In my opinion you can’t compare Islam with Christianity. It isn’t a likeable religion, rather in all sorts of regards, a reactionary religion,” he said.

Westergaard, 75, has received death threats and even escaped a murder attempt because of a 2005 cartoon he drew for Danish newspaper Jyllands-Posten, portraying the Muslim prophet Muhammad with a bomb in his turban.

In his interview with the Kölner Stadt-Anzeiger, Westergaard cited the persecution of homosexuals in Islamic countries, which he branded “barbaric.” He said, however, that he would “always argue that people have the right to practice this religion.”

And Merkel wasn’t deterred from making a speech defending press freedom and Westergaard on Wednesday night in Potsdam.

“[We] are talking here about the freedom of opinion and of the press. It’s about whether in a Western society with its values, he is allowed to publish his Muhammad cartoons in a newspaper or not,” Merkel said.

“It is irrelevant whether his caricatures are tasteless or not, whether he thinks they are necessary or helpful, or not. Is he allowed to do that? Yes, he can.”

At the same time Merkel slammed as “abhorrent” plans by US pastor Terry Jones’s Dove World Outreach Center in Florida to mark the ninth anniversary of the September 11, 2001 attacks by burning Korans.

The remarks come at a time of sharp focus on Islam and the integration of Muslim communities in Germany in the wake of Bundesbank board member Thilo Sarrazin’s controversial remarks about immigration last week. Politicians including Merkel have condemned Sarrazin’s provocative comments about Muslims but also raised the importance of having a frank debate about integration.

Westergaard’s cartoon and 11 others like it sparked protests in Muslim countries around the world. In January a Somali man allegedly broke into Westergaard’s home and threatened to kill him with an axe and a knife. In 2009 two men were arrested in Chicago allegedly with plans to attack the Jyllands-Posten newspaper.

Westergaard told reporters that his cartoon, depicting Muhammad with a turban with a lit fuse, would live on even if he was killed.

“Maybe they will try to kill me and maybe they will have success, but they cannot kill the cartoon,” Westergaard said before being awarded the prize.

The chancellor was honouring someone “who in our eyes kicked our Prophet, and therefore kicked all Muslims,” ZMD head Aiman Mazyek told the radio station Deutschlandradio Kultur.

He said giving Westergaard a prize in this “highly charged and heated time” was “highly problematic.”

But Merkel’s spokesman earlier Wednesday defended her decision to give the keynote speech.

“The chancellor is sending out to all people in Germany, Muslims or not, the message that press freedom, which will be the focus of her speech, is a precious commodity,” spokesman Steffen Seibert told a regular briefing.