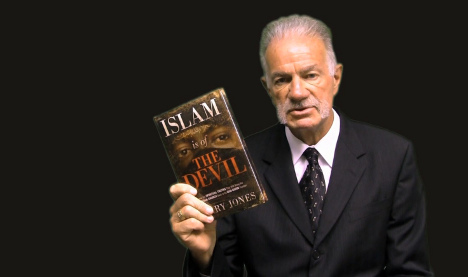 “We want to distance ourselves fully from this plan and from Jones,” said Stephan Baar from the ‘Christian Community of Cologne’ in the western German city.

Jones, the pastor of the Dove World Outreach Center in Florida says he will burn copies of the Koran on this weekend’s ninth anniversary of the September 11 airborne attacks in protest at what he calls “the evil of Islam.”

Baar said his community had had “no contact” with Jones since the disgraced pastor left in 2008 over “differences over direction.”

Jones founded the German community at the start of the 1980s. When he left, it had around 800 members but now numbers between 60 and 80, Baar said.

The controversial Jones took over the Dove World Outreach Center in Florida after the previous head died in the 1990s but continued to lead the community in Cologne, Baar said.

Jones’ Koran-burning plan has sparked outrage across the world. US Secretary of State Hillary Clinton slammed it as “disgraceful” while the Vatican termed it “an outrageous and grave gesture.”

The European Union and the Arab League have also condemned the proposed mass burning.

Islamic leaders have warned that if the planned burning goes ahead, it would damage ties between Muslims and the United States.