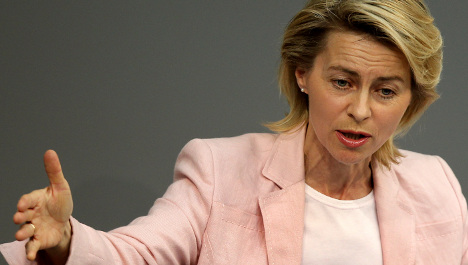 “I don’t think much of coupling child-rearing with cuts to livelihood. The first ones who will have to carry the burden are the children,” she said.

In the wake of Bundesbank board member Thilo Sarrazin’s explosive remarks this month on immigration and its implications for Germany’s future, a heated integration debate has begun. Politicians from both the CDU and the centre-left Social Democrats, have suggested punitive measures such as welfare cuts as a way of forcing immigrant communities to better integrate with mainstream Germany.

But von der Leyen said that if there were signs of child neglect, the youth authorities at the Jugendamt had to intervene, “independent of a migration background or not.”

The deputy chairman of the CDU’s parliamentary group, Michael Fuchs has called for sanctions on immigrants who refuse to integrate, including cutting their Hartz IV unemployment benefits.

Von der Leyen, by contrast, demanded that early childhood education become the focal point of integration policy. “Knowledge of the German language and friendship with German children in the third or fourth years of life are the basis for successful integration,” she said.

The key questions was whether all children had the chance for a good early education. She blasted the fact “that the important integration debate has focussed so much on ethnic background.”

Regarding Sarrazin’s controversial theories, von der Leyen said: “I don’t like the generalisations in such statements,” and stressed that people with immigrant backgrounds could be “very successful.”

With an ageing population, Germany needed skilled workers from abroad to replace the stack or workers set to retire in coming years, he told the Hamburger Abendblatt.

“From 2015, we will lose about 250,000 workers each year. By then, we will already be short three million workers in the job market – especially skilled jobs,” he said.

Meanwhile, the German government pledged Wednesday to do more to improve the integration of immigrants already in the country, particularly on teaching the language.

“Language, language and more language” is the focus, the minister said. “Speaking German is the starting point for everything.”

He said that the first wave of immigrants into Germany, so-called guest workers in the 1960s and the 1970s, and the most recently arrived were reasonably well integrated into German society.

“But for the generations between the two, for nearly 20 years, nothing, or little, in any case not enough, was done,” he said.

The government stressed that the timing of the publication of its national integration programme had been planned for some time and had nothing to do with the polemic on immigration sparked by Sarrazin, who claims Europe’s top economy is being undermined and overwhelmed by immigrants and that allowing in millions of “guest workers” was a “gigantic error.”