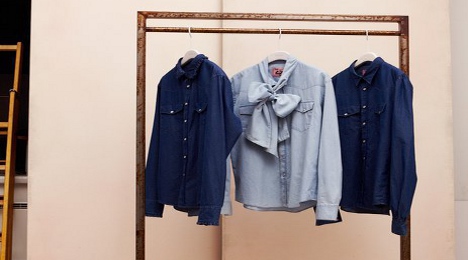 Acne has joined forces with transvestite publication Candy Magazine for a

series of three shirts, available in denim and silk, according to the magazine’s website.

The collection is named after characters in the 1980s soap opera Dynasty – Alexis, Krystle and Sammy Jo – in tribute to Joan Collins, Linda Evans and Heather Locklear respectively.

The shirts are a take on the classic masculine western blue shirt which are designed to “create a bit of gender confusion”, according to Candy Magazine editor-in-chief Luis Venegas.

“Instead of the usual unisex statement ‘for men and women’, I want people to ask: ‘is this for men, or women?'”, Vegas said to Interview Magazine.

The selection of shirts will be available at selected retailers and Acne stores and Acne founder Jonny Johansson told Wallpaper.com that a collection which champions androgeny is a “perfect collaboration” for the Swedish firm.

“This collection touches on ideas I have always played with when designing for Acne, the tension between male and female and what happens when you shift things around a bit,” he told the website.

Venegas explained that there is a important difference between transexual and gender neutral and hopes that the shirts will be the “opposite” of unisex.

“I wanted to create a bit of gender confusion,” said Venegas, who is the driving force behind Candy Magazine which is marketed as “the first fashion magazine ever completely dedicated to celebrating transvestism, transexuality, cross dressing and androgyny, in all its manifestations.”