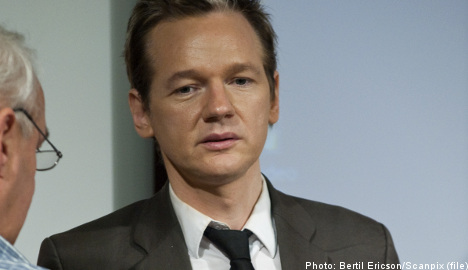 “The only victim here is me,” stressed the 39-year-old Australian spokesman of the whistleblower website notorious for having recently published nearly 77,000 classified US military documents about Afghanistan.

“These accusations are baseless, and the process by which they’ve come out is disturbing,” Assange told AFP in a telephone interview, maintaining that he has decided to stay in Sweden to prove his innocence.

“This entire rape investigation has been conducted without my input,” he lamented, pointing out that “no one has asked me any questions regarding the rape case. The police refuse to say if there is a warrant out for me or not.”

“It’s been two weeks now,” added the lanky former hacker who has been at the heart of a media circus ever since a confusing muddle of rape charges against him were first filed, then withdrawn and then filed again.

It was late in the evening on August 20 that rape allegations from two women led a duty prosecutor to issue an arrest warrant for Assange.

Assange admitted to AFP that he had met both women in question, who according to their lawyer are both Swedish and aged between 25 and 35, saying “they were both at my press conference.”

However, when asked whether he had had sex with either of the women, he refused to answer, saying it was “a private matter.”

The whole case, he said, “is a clear set up by the people involved, the complainants and possibly the Expressen tabloid,” which first broke the story just hours after the initial arrest warrant was issued.

“There is at different stages in the case personal vendettas, there is ideology, there is carreerism … from the head prosecutor (Marianne Ny) of the most disgusting kind,” he claimed.

The enigmatic Australian, who in the past has charged the allegations against him were part of a Washington-orchestrated “smear campaign” aimed at discrediting WikiLeaks, was Tuesday more cautious about handing out blame beyond Sweden’s borders.

US intelligence services “are probably very happy now,” he said, adding however that “mentioning their involvement is for now only speculation.”

“And there’s also circumstantial evidence that there is political involvement but not clear evidence,” he added.

Assange said his website now had “two reliable intelligence sources that state that Swedish intelligence was approached last month by the United States and told that Sweden must not be a safe-haven for WikiLeaks.”

Regardless of who is behind the allegations, he acknowledged the criminal case against him had caused significant damage to his organisation, which is preparing to publish another 15,000 classified US military documents about the war in Afghanistan and to again draw the ire of the Pentagon.

Assange, who shortly before the rape allegations first emerged had said WikiLeaks would release the new, even more controversial batch of documents within a few weeks, refused to say Tuesday when he thought they would be published.

“The Swedish case has caused delays, significant delays in all of our projects. It’s been an enormous disruption,” he said.

That does not mean the website is putting its leaking activities on hold.

“We have upcoming releases relating to financial fraud, the banking industry and war crimes,” Assange confided.

But due to the Swedish charges, the WikiLeaks founder himself has been forced to withdraw from most of the websites activities and reduce his spokesperson role to a minimum.

“An allegation has been reported all around the world. It’s at present on six million websites,” he pointed out, adding that “in fact one in twenty websites mentioning the word rape also mentioned my name.”