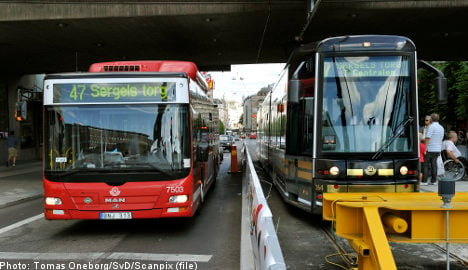 Although SL initially decided in 2006 to move ahead with the installation, the project was delayed partly due to concerns that the drivers would be offended, the Dagens Nyheter (DN) newspaper reported.

“There is a certain fear, particularly in the profession, that drivers would feel it is an invasion of privacy and that it is awkward to have to blow [into the device],” Erik Stenbäck, security engineer at SL, told the newspaper.

All drivers will have to blow into the devices, which prevent a vehicle from starting if it senses alcohol in the driver’s breath.

“It is of no intrinsic value to SL for the driver to have to blow in front of passengers,” Stenbäck told DN.

“The ignition lock is mounted on the left in the driver’s seat and very few can see it being used. However, we want to show our passengers that SL’s drivers are not intoxicated.”

The company recently installed the devices for a project on approximately 100 buses that leave from Kallhäll in Järfalla, northwest of Stockholm, the report said.

In addition, the purchases of new buses for the suburbs of Norrtälje, Nacka-Värmdö, Botkyrka and Söderort have all required that the devices be installed on the vehicles.

Separately, on Tuesday, Birgitta Rydberg, a Liberal Party commissioner on the Stockholm county council called for ignition locks to be installed in all council cars, including those of managers.

“County council commissioners and senior officials will naturally be subject to the same rules,” Rydberg, who has the device installed in her official car, told DN.