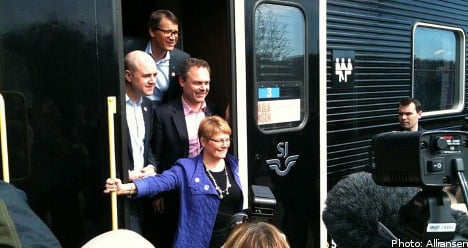 The coalition has together formed the government since gaining the majority of parliamentary seats in the 2006 election.

The Alliance was formed as Alliance for Sweden (Allians för Sverige) by party leaders Fredrik Reinfeldt, Maud Olofsson, Lars Leijonborg and Göran Hägglund on August 30th 2004 with a declaration to work towards a viable centre-right government alternative to the centre-left Social Democrats, who had by then held power for 23 of the previous 26 years.

The 2006 election came to be defined by the concept of “Utanförskap” (Alienation). The Alliance regularly cited figures of up to 1.5 million Swedes living on the margins of the labour market and society, proposing to address the problem. When the votes were counted the Alliance parties had won 178 seats in parliament and the opposition parties 171.

On August 26th, the Alliance presented its election manifesto entitled: A Sweden which sticks together (Ett Sverige som håller samman), with a focus on jobs with reform measures totalling 12.8 billion kronor ($1.72 billion).

*A fifth round of in-work tax credits

*Extending the right to work from 67 to 69-years-old

*Measures to tackle youth unemployment, such as apprenticeships

*Green car allowance of 40,000 kronor per vehicle for low-emission cars

The Alliance parties are going to polls on their record of being the responsible alternative for Sweden’s public finances.

Finance minister Anders Borg repeatedly emphasises the fact that Sweden has fared the financial crisis and subsequent recession better than many other EU countries but warns that caution remains with regard to the challenges that lie ahead both at home and abroad.

The Alliance, like the Red-Green opposition, is keen to emphasise that there are two clear alternatives available to voters on September 19th. They argue that while the centre-right parties offer a platform for jobs, the centre-left offer welfare. 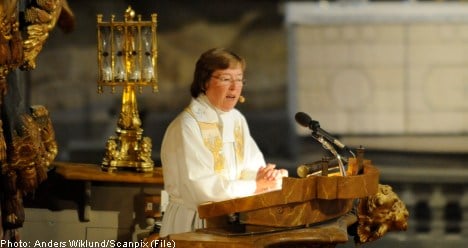 Editor’s Note: The speech was delivered to the assembled members of parliament, the King, Queen and other dignitaries in Stockholm Cathedral on Tuesday, October 5th.

During the speech, the leader of the far-right Sweden Democrats and his 19 parliamentary colleagues stood up and left the church in protest at the subject matter addressed by the bishop.

Åkesson later apologised to the King, but claimed that Brunne’s reference to anti-racism demonstrations held across Sweden the night before left the Sweden Democrats with no choice but to leave.

Brunne later explained that the speech was not specifically directed against any particular party but reflected an interpretation of modern events and developments using the gospel.

Here is the speech, translated in full:

Congratulations on your mandate. Congratulations to you who have been chosen with confidence. Almost 85 percent, or slightly more than six million people, consider you to be the best equipped to shape a positive present and sound future for us all. It is a great thing to be carried by such a confidence. And the task is given to you collectively. Not for each and every individual. Once chosen you are part of a context where your combined efforts are worth more than the will of each and every individual. After all, is that not how democracy works? It is about raising your gaze from your own interests and put to the public good. To take in Bastuträsk, Tomelilla, Göteborg, Grästorp, Husum and Visby. Politics, in one sense, is taken to mean living together in a city. Then it is also about raising one’s gaze still further, because we do not live only within ourselves. Our task and our responsibility is greater than the borders of the nation. There is a world which needs us – our solidarity, our money and not least our eyes and our voices.

There is much that is demanded of you, but do not lose heart. We are behind you, we who have given you your mandate, to speak on our behalf. Because is that not how democracy works?

We have to listen to the gospel. It was not the Swedish Riksdag that Paul was adressing, but a group of people in the city of Thessaloniki. To them he said: We exhort you to value those who have the heaviest burden among you, those at the fore. Show them respect and appreciation. And he continued with the advice: Don’t quench the Spirit, test all things, and hold firmly to that which is good. These are words also for all of us who have voted, and for all you who have been elected with trust.

Salomon in his wisdom neither wrote of the Swedish Riksdag, but the words could also be addressed to you: God is the guide of wisdom. God leads us on the correct path. For both we and our words are in his hands, as are all understanding and professional skill. Wisdom – she who with her craft has shaped everything. Words of mercy more than of demand. Everything does not rest on myself, nor my party.

When Jesus approached Jerusalem and the disciples allowed their happiness to be heard, a group of farisees asked if Jesus could silence his disciples. One wonders why they could not address the disciples directly. They were, after all, adult human beings. And the answer they received was thus: if these remain silent, the stones will cry out.

What was it that they had experienced on their way. Yes, among other things, a blind man was cured and could live his life fully and whole. And then the meeting with the despised tax collector Zachaeus. He who climbed the tree to be able to see, but perhaps also to hide. To the blind man, Jesus said: What do you want me to do for you? To Zachaeus he said: Come down from the tree, I want to visit your home. The meeting, face to face and eye to eye, in conversation, which made a lifelong impact on the the blind man and Zachaeus. This was what the disciples had experienced. The massive change for the two people. This was why they could not keep their joy to themselves. And if they had been silenced, then the stones would have cried out over the importance of this great change. The transformation which literally became of decisive importance.

It is these changes for people which are a large part of your mission. And in that you should never move far away from us who gave you your mandate that we are unable to you meet face to face, that you never cease from calling someone down from the tree and saying: I want to talk with you. To hear someone’s cry and say: What do you want me to do for you?

We who believe in people’s dignity and equal value, regardless of the country in which we are born, regardless of which gender or age we have, regardless of how our sexuality is expressed, we believe and hope that you continue to have the ability to say: I want to talk to you, and the enduring desire to ask the question: What can I do for you? And feel the great pleasure in the change that this can achieve.

Yesterday evening thousands of people gathered in Stockholm and in various parts of the country to make their voices heard. To call out their disgust at that which divides people. The racism which says that you don’t have as much worth as I do; that you shouldn’t have the same rights as me; aren’t worthy of living in freedom, and that is the only reason – that we happen to born in different parts of our world – that is not worthy of a democracy like ours to differentiate between people. It is not possible for people of faith to differentiate between people. Here it is not sufficient to give a couple of hundred people a mandate to speak on our behalf. Here we have a joint mission. And if anyone remains quiet or is silenced in the fight for human value, then we have to see to it that the stones also cry out. We do this with the help of God.

With that in mind, we continue the present, towards the future.

Bishop in the diocese of Stockholm

Translation by The Local