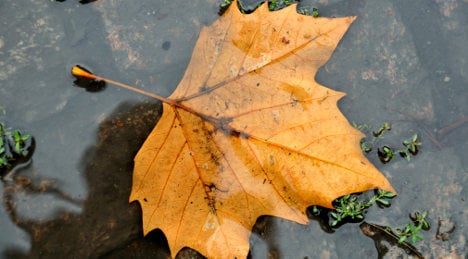 DWD meteorologist Jens Hoffmann said that a high pressure system named ‘Helmut,’ which is currently sitting over Britain, was not looking inclined to move east and provide Germany with some warmer and sunny days as the meteorological autumn begins Wednesday on September 1.

Instead, cool sea air flowing south and right across Germany to the Alps is damping the ambitions for a pleasant and agreeable end to summer.

“(Helmut) is staying put for now, and is showing us, in the true sense of the word, the ‘cold shoulder.’”

Unsettled conditions are set to continue Tuesday afternoon with heavy cloud in the south and southeast, accompanied by showers and isolated storms. Though most of the rest of the country should stay dry, high temperatures won’t reach more than 13 to 19 degrees Celsius.

Overnight lows will drop to 12 degrees across the north but considerably colder in the south, with a chilly four degrees in parts. Light frost is even possible in parts of the south.

It will be a fresh start to the start of autumn on Wednesday, with maximum temperatures ranging from 13 degrees in the eastern region of Vogtland and the Alps to 20 degrees in the Upper Rhine.

Heavy cloud will prevail from the North Sea to below the eastern highlands and as far as eastern and northern Bavaria, along with isolated showers. Otherwise it will be mostly dry, though some parts will see cloud overhead. The southwest has the best chance of seeing some decent sunshine, though the sun will also likely break through on the Baltic coastal region.

Overnight will again be chilly, dropping to between 5 and 12 degrees.

On Thursday the south and west will, after early morning fog in some areas, remain mostly dry, though with some cloud. Heavier cloud will dominate the east and north, with some rain. High temperatures will range from about 15 degrees in the eastern highlands to 21 in the Upper Rhine.

Overnight, the skies over most of Germany will remain clear, though the east may see some cloud and a shower or two, with low temperatures again ranging from 5 to 12 degrees.

Unsettled clouds will dominate on Friday, especially in the east, where this will develop into isolated showers. The southwest, more happily, can expect longer patches of sunshine. Highs will range from 15 to 20 degrees.