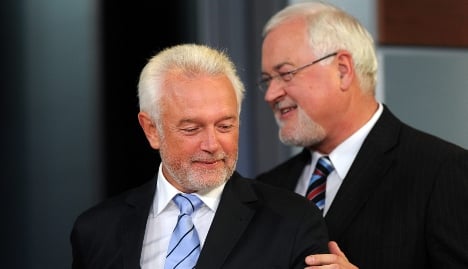 Under the present rules, a new poll would not need to be held until the autumn of 2014.

The decision could have major ramifications. The state has been governed by the centre-right coalition of the conservative Christian Democrats (CDU) and pro-business Free Democrats (FDP) since the last election in September 2009.

Then, Premier Peter Harry Carstensen took the state to an early election by deliberately losing a vote of no confidence. But since then, the political mood has shifted against the CDU and FDP.

Presiding judge Bernhard Flor said in the written decision Monday that several provisions of the state electoral law were invalid “in their interplay” with the constitution.

The issue stems from a quirk in Schleswig-Holstein’s electoral law, which contains ambiguous wording on the complex question of “overhang seats.”

How to deal with these overhang seats are a source of controversy and Schleswig-Holstein’s electoral law is not sufficiently clear.

The CDU and FDP managed to form a government after the last state election in September 27 only because the CDU won three overhang seats for which the opposition parties were not compensated.

For this reason, the Greens and the South Schleswig Voter Federation (SSW), which represents the state’s Danish minority, lodged a complaint with the court.

CDU parliamentary leader Christian von Boetticher said there was no need to have new elections before September 2012. But a new election would not be a problem for the party, he said.

The FDP’s parliamentary leader, Wolfgang Kubicki, said there would be a speedy and efficient implementation of the ruling.

“Only after the reform of the electoral law is resolved, can an election date be set,” he said.

Indeed, the CDU and FDP had already agreed on an equivalent reform last year during coalition negotiations, Kubicki said. The date of May 2011 for the reform was “ambitious but achievable,” he said.

The court made it clear with its ruling, however, that the existing government was legitimate and could carry on governing until the next election.

Centre-left opposition Social Democrats state leader Ralf Stegner said he believed “it will be two years” until the next election and added that there was already a deadlock.