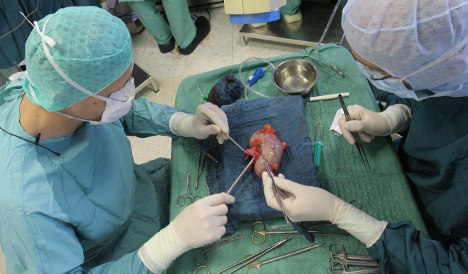 Members of the ruling conservatives have called for a relaxation of the consent rules so that brain-dead patients’ organs could be used if they had not previously objected. This, the politicians argue, would boost the number of much-needed organs being donated for transplantation.

“It does more harm than good,” he said.

Under the proposal, organs could be gathered from a brain-dead patient provided they had not previously objected to such a removal. At present, patients need to have specifically given their approval for their organs to be used for donation – or their family must give the consent on their behalf.

Montgomery also rejected suggestions that every person should be compelled to state during their lives whether or not they wanted to donate organs. People had a right not to be forced to address the end of their lives, he said.

On Sunday, Rolf Koschorrek, a member of the parliamentary health committee for the CDU, described potential revisions to the law as a “chance to significantly improve the supply of donor organs” in Germany.

Health Minister Philipp Rösler said the law should not overstep its bounds: “In regards to this issue, I think there’s only one option: You have to persuade people,” Rösler told the paper.

“There is also no direct connection between the legal basis and the number of donations,” he added.

According to government statistics, some 12,000 people in Germany are currently waiting on organ transplants.