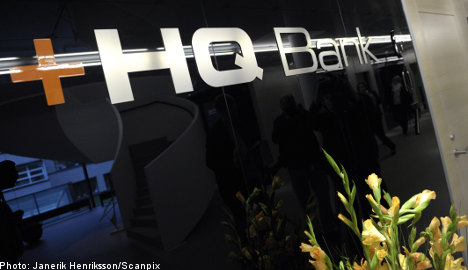 The board of the bank, which was put into involuntary liquidation on Monday, has approved the Swedish Financial Services Authority’s choice of liquidator, lawyer Björn Riese.

“My main priority is to sell the bank, to try to find someone who can keep operations going in the future,” Riese told a press conference on Monday. He said he wanted this to happen as soon as possible.

Riese defended the decision to close the bank and insisted that customers were his focus. Their interests would be protected “as far as possible,” he told the press conference.

Customers and other creditors of the bank were first in line to receive money.

“Whatever is left over will go to the shareholders,” Riese said, adding that he could not say how much this would be.

“I was only appointed liquidator a short while ago,” he pointed out to journalists.

Riese defended the decision to keep the banks offices closed on Monday, saying that he needed time to acquaint himself with the issues. He did not say when the offices would open again.

The share price of HQ Bank’s parent company, HQ, fell by 83 percent to 9.6 kronor in opening trading on Monday. Shares were worth 143 kronor in April. The fall leaves the company valued at 270 million kronor, compared with a stock market value of 7 billion kronor in mid-2007 and 4 billion earlier this year.

Founders and major shareholders Öresund and Mats Qviberg are the biggest losers from the collapse, but the bank also has a large number of small shareholders. Of almost 8,400 shareholders, most have fewer than 500 shares in the company. Many ordinary Swedes have indirect exposure to the bank through funds such as Swedbank Robur.

The Swedish Financial Services Authority says that HQ Bank has seriously overvalued its trading portfolio over a long period of time. It has also misreported its financial position, the authority says – in practice, it was undercapitalized.

The bank’s risk management has also been criticized. The company tried to hide problems by making incomplete or incorrect estimates of its capital requirement, according to the authority’s investigation.

Günther Mårder, CEO of the Swedish Shareholders’ Association (Aktiespararna), said he was considering taking legal action against members of HQ Bank’s board and management.

“Right now, we’re not ruling anything out,” he said, but added that he was waiting for the results of two investigations into the collapse – one from the Stockholm Stock Exchange and one by HQ’s own board of directors. Mårder said the stock exchange’s probe was likely to show that HQ had failed in its duty to keep shareholders informed:

“This would leave the door open for great opportunities for moving forward in the legal process and for a damages suit,” he said.

Mårder said it was already established that individuals within HQ Bank had acted contrary to the company’s interests.

“There are people both within the management and the board that have failed,” he said.

Investors who have HQ funds are unaffected by the collapse, as the funds have been taken over by Öresund, one of the bank’s main shareholders.

Financier Mats Qviberg, founder and major shareholder of HQ Bank, has kept a low profile since the liquidation. In an email interview with E24, he said the collapse “naturally feels very tough.”

Qviberg added that the Financial Services Authority’s criticism was justified, but said that he was surprised that the bank’s licence was withdrawn. He said he had hoped for warnings and fines.

“The company was viable and I feel sorry for customers and staff who could have continued under a new board and management,” he said.

Lloyds Bank expects to close at least 13,000 accounts. Photo: Lloyds Bank
According to a report in The Times, thousands of Britons who live in Europe face being stripped of their UK bank accounts and credit cards, because of the UK government's failure to agree rules for operating after Brexit.
Each of the EU's 27 member states has different rules for cross-border bank accounts which will start to apply immediately the UK's transition period ends on 31st December 2020.
“In some cases, continuing to serve customers would be incredibly complex, extremely expensive and very time-consuming, and simply would not make economic sense,” a source at one British bank told the newspaper. “This is passporting — this is the reality of Brexit.”
If a way is not found to continue pan-European banking rules, or passporting, UK banks will br breaking the law if they don't apply for new banking licenses in each European Union Country.
READ ALSO How the post-Brexit banking changes affect British people in France
Lloyds, Britain’s biggest banking group, began writing to customers in August, warning them that their bank accounts would  close down on December 31.
The bank estimates that 13,000 customers, including those based in Holland, Slovakia, Germany, Ireland, Italy and Portugal, would lose their accounts.
“If customers have regular deposits into, or payments out of, their account, they will need to make other arrangements before their account is closed,” the bank said.
Barclays and Coutts have also started contacting customers.
“In light of the UK leaving the EU at the end of 2020, we continue to review the services we offer to customers within the European Economic Area (EEA), and any impacted customers will be contacted directly,” Barclays said in a statement. “The timings for account closure will depend on the type of product that a customer holds, but we will always give notice to customers.”
“In the event that no alternative to the European Economic Area passporting regime for financial services is agreed between the UK and EU, we have taken the difficult decision to withdraw from offering our services to clients who reside in the EEA,” Coutts said.
SHOW COMMENTS
Url copied to clipboard!