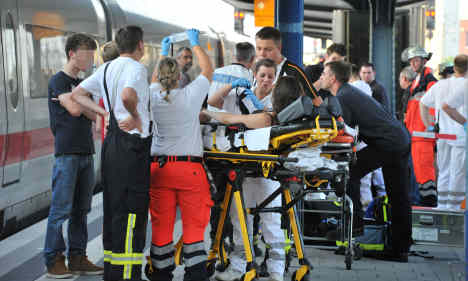 The company is still processing claims related to AC outages, according to a spokeswoman. Meanwhile, CEO Rüdiger Grube plans to announce other measures meant to help the rail operator control future technical problems and foster better communication over disruptions.

As part of a “customer- and quality-offensive,” Grube is keen to take steps that would make ICE trains less prone to malfunction during extreme weather conditions.

A summer heat wave sent temperatures soaring past 30 degrees Celsius across much of the country last month, leading AC units on board about 50 Deutsche Bahn trains to fail completely or within individual cars. ICE 2 trains were particularly affected.

On July 10, temperatures reached up to 50 degrees Celsius on an ICE train from Berlin to Cologne after the cooling system broke down. Several passengers collapsed and nine students on a class field trip were subsequently hospitalised when they got off the train in Bielefeld.

In a bid to win back public trust and mitigate a growing public relations crisis, members of the Bahn board paid distressed passengers €500 for their suffering and reimbursed victims with vouchers worth 1.5 times the price of their tickets.

CEO Grube reported that thousands of customers had received payments totalling €374,000 by the end of July.

Deutsche Bahn plans to start overhauling its 44 ICE 2 trains in November, with work set to conclude in 2013. However, Grube said the company could use few of its ICE reserve trains due to additional axle inspections, calling it an “Achilles heel.”