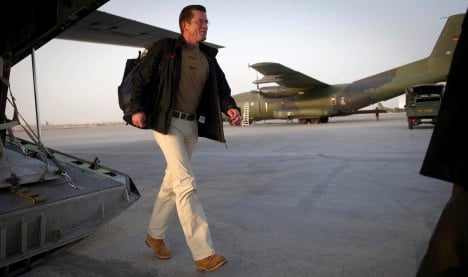 “We can conceive of a trial period in the Bundeswehr,” Guttenberg told the Bild am Sonntag newspaper. “After six months, anyone could decide, ‘Being a soldier is not for me.’ And vice versa, the Bundeswehr can decide that ‘This young man doesn’t fit here.'”

Last week, the defence minister announced his intention to cut troops numbers from 252,000 soldiers to 163,500 and effectively abolish conscription by mid-2011. Guttenberg said, however, that he intended to keep military service anchored in the German constitution.

Among the reforms envisioned by Guttenberg are plans to develop a 7,500 to 15,000-strong force that serves on a short-term basis, between 12 and 23 months. The defence minister said he hoped to attract good candidates through solid pay and educational opportunities.

“We want to encourage as many young people as possible to offer service to society,” he told the newspaper.

Guttenberg addressed mounting opposition within his own conservative camp to the military reform plans – saying his political future was not the issue. Party conventions scheduled in October and November for Merkel’s CDU and Guttenberg’s Bavarian sister party the CSU are expected to be key in deciding on the final reforms.

“It’s not about what it means for me,” he said. “I have to fulfil my responsibility and that’s based on doing what’s necessary.”

“I’m very sympathetic to the basic idea,” Guttenberg said. “But it would require changing the constitution and – considering the 700,000 to 800,000 young people each year – quite a lot of money.”

Guttenberg is currently in Afghanistan on an unannounced visit. On Sunday, the defence minister and Norbert Lammert, president of the lower house of parliament, attended a ceremony for fallen German troops. Talks with Afghan President Hamid Karzai and NATO Commander General David Petraeus are also on the agenda.