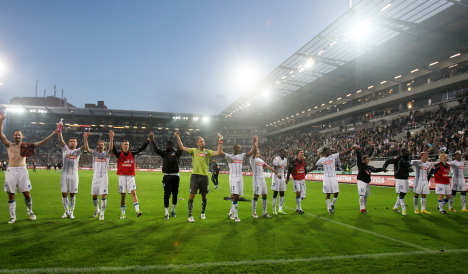 The Ghana defender headed home in the 87th minute to earn his side the three points that put them top of the league on the second weekend of the season after last week’s 4-1 win over Werder Bremen.

“We had a few problems in the first half, but we changed a few things around and played better,” said Hoffenheim coach Ralf Rangnick, whose side are now top and level with Kaiserslautern, shock victors over Bayern Munich on Friday.

“It was important to get three points. I didn’t like the first half, but the second was much better.”

Earlier, Wolfsburg playmaker Diego marked his return to the Bundesliga with a goal but was unable to prevent his new side’s shock 4-3 defeat by Mainz, while Schalke also crashed at home to Hanover.

After an unproductive season with Juventus, Diego joined Wolfsburg on a four-year deal for a fee of €15.5 million on Friday, and the former Werder Bremen man showed his class with a well-taken goal against Mainz.

But Wolfsburg coach Steve McClaren, the former England boss, was left unimpressed as his side squandered a 3-0 lead and three points.

“It is hard to explain what happened today,” said McClaren. “It is something I have not previously experienced; neither as a player, nor as a coach. If you lose after holding a 3-0 lead, then there are obviously problems of character and mentality.”

“I have never seen such a dramatic loss of quality,” he said. “My team has already shown two faces, but Diego and Dzeko have proved they can cause teams problems.”

But Mainz fought their way back into the game by scoring either side of half-time through Denmark striker Morten Rasmussen and Colombia midfielder Elkin Soto.

Andre Schürrle equalised in the 58th minute with Adam Szalai netting five minutes from time to complete McClaren’s misery as his side capitulated.

Last season’s runners-up Schalke were shocked 2-1 at home to Hanover, with defender Konstantin Rausch and striker Mohammed Abdellaoue scoring either side of half-time as the Royal Blues suffered their second consecutive defeat.

Schalke midfielder Jermaine Jones scored a consolation with a header in the last 10 minutes, but the home fans booed the home side’s poor performance, and Germany defender Christoph Metzelder was singled out.

Hamburg had to come from behind to win 3-1 at Eintracht Frankfurt as Dutch defender Joris Mathijsen scored a 61st-minute equaliser to spare his side’s blushes before Ruud van Nistelrooy claimed his third goal in two games.

Peruvian Jose Paolo Guerrero netted in the 89th minute to seal the three points for Hamburg. Bremen bounced back from their hammering on the opening day of the season

against Hoffenheim when they beat Cologne 4-1, while Freiburg beat Nuremberg 2-1 after coming from behind thanks to two goals by Senegal striker Demba Cisse.

On Friday, champions Bayern Munich suffered a shock upset when they lost 2-0 at 10-man Kaiserslautern. Bayern were beaten in only their second German league game of the season and were punished for a lethargic first-half performance, as Cologne claimed

Thomas Müller wasted a golden chance for the visitors in the first half and Kaiserslautern, last season’s second division champions, made Bayern pay through goals from Ivo Ilicevic and Srdjan Lakic.