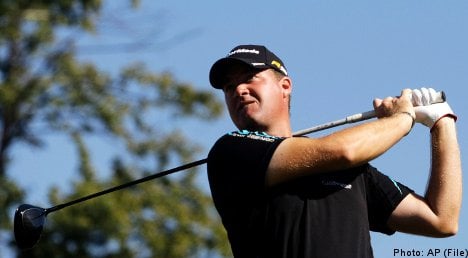 Walker Championship in Gleneagles and sealed a place on Europe’s Ryder Cup team.

Hanson, who won the Czech Open last week, needed a top-43 finish at Gleneagles to guarantee he would make Colin Montgomeries’s squad for the clash against the United States at Celtic Manor in October.

And the 32-year-old did just that as birdies at the 15th and 17th secured a final round 73 that ensured he would become the eighth certain member of the team and the fifth new cap.

“I just tried to take it one shot at a time. I was very tired and was trying not to think about making the team, but I felt a little bit of pressure and those birdies felt great.”

At three over for the day and level par for the tournament after 14 holes, he was outside where he had to be if Simon Dyson won the title, but he rolled in a 20-footer on the 15th and two holes later struck an eight iron to two feet.

Meanwhile, Italy’s Francesco Molinari was still one ahead of his brother Edoardo after five holes.

Francesco is another of Colin Montgomerie’s debutants, while Edoardo is in contention for a wild card and hopes to strengthen his claims by winning.

Dyson would make the team if he won and Miguel Angel Jimenez was outside the top nine, but Jimenez moved into a tie for third while Dyson was sixth as the round progressed.