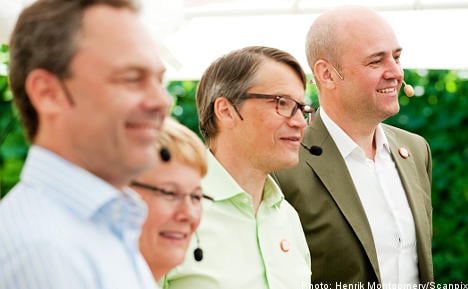 The four centre-right Alliance parties amassed a combined total of 50.0 percent in Sifo’s fourth August poll, enough to secure a slim absolute majority in the Riksdag.

The three Red-Green parties bidding to oust the government scored 43.3 percent, giving the Alliance a 6.7 point lead, according to the survey published in Svenska Dagbladet.

The far-right Sweden Democrats soared back over the 4 percent parliamentary threshold, securing the support of 4.6 percent of respondents.

Mona Sahlin, Reinfeldt’s rival for the prime ministerial post, also received a boost in the poll with 30.8 percent of respondents siding with the Social Democrats, a rise of 0.7 percentage points.

The Liberal Party by contrast witnessed a 1.6 point dip in support, bringing Jan Björklund’s party back down to 6.2 percent.

Sifo asked 1,420 potential voters between August 23rd and 26th which party they would vote for if the election were held today.