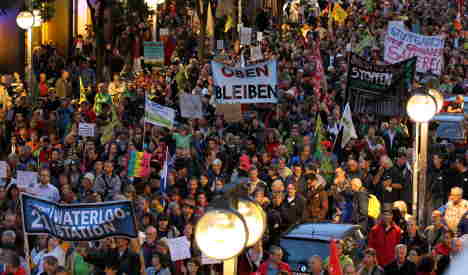 “We need to start acting like grown-ups,” Grube said, adding that a discussion could be scheduled for September.

Organisers of the peaceful demonstration estimated that 50,000 people rallied Friday evening against the multi-billion-euro Stuttgart 21 project, which aims to transform the city into an important European rail crossroads. Police figures put the tally at 30,000 protesters.

Despite Friday’s public demonstration, work to demolish the northern wing of the Stuttgart station continued on Saturday.

In an interview with broadcaster SWR, Grube said he would not accept any preconditions to a dialog, to which the Greens’ Baden-Württemberg state parliamentary leader Winfried Kretschmann, as well as Tübingen mayor Boris Palmer, would be invited.

Grube said he agreed to the roundtable suggestion with one of the project’s supporters, Baden-Württemberg state premier Stefan Mappus.

“The communication over Stuttgart 21 and Wendlingen-Ulm has simply gone really, really badly,” Grube told the broadcaster.

“Let’s sit down at a table and continue with the exchange – particularly of the facts,” he said. “What we cannot do is have someone say, ‘My opinion will not change.'”

State Green Party leader Kretschmann welcomed Grube’s offer but said the discussion must include members of the broader alliance opposing the €4.5-billion project.

“We’ll certainly talk with Bahn CEO Grube,” Kretschmann said. “We were the ones that issued an invitation to Grube and other political representatives on the supporter side for a discussion, but it was brusquely rejected until now.”

The project aims to make the city of 600,000 part of one of the longest high-speed lines in Europe, the 1,500-kilometre (930-mile) “Magistrale for Europe” linking Paris, Strasbourg, Munich, Vienna and Bratislava, and Budapest.

Stuttgart’s station will be utterly transformed, from a terminus into an underground through-station, so that trains no longer have to chug in and back out but can whiz through on their way to other European destinations.

The project, part-funded by the European Union, includes restructuring the Stuttgart rail node, creating a link to the city’s airport and constructing a new line between nearby Wendlingen and Ulm.

Opponents object in particular to the side wings of the train station building, an interwar modernist classic designed by Paul Bonatz, falling victim to the wrecking ball.