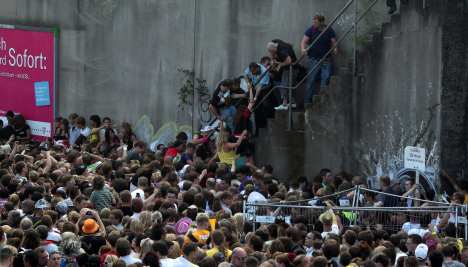 Schaller claimed police set up barrier chains ahead of the July 24 stampede in the entrance to the main event area. The fitness studio entrepreneur, whose company Lopavent was tasked with organising the event, said the chains were “probably the cause of the catastrophe.”

Thirteen women and eight men were killed and more than 500 others injured after a mass panic broke out at the techno music festival in the Ruhr Valley city of Duisburg.

“For us, the question is why the police did that,” he told Der Spiegel. Schaller alleged that police set up three barrier chains – two in the tunnel area and one at the lower end of the entry ramp – as a crowd was showing up for the event shortly before 4 pm. The first death on the entry ramp was reported at 5:02 pm.

In a bid to show alleged tactical errors by police, Schaller said he would post online all video footage captured by the organiser’s seven surveillance cameras – a total of more than 22 hours of tape.

According to German daily Bild, the videos are scheduled to be released early next week.

“Everyone should be able to see the order of events for themselves,” Schaller told Der Spiegel.

Schaller said he will send a company representative to an investigation committee meeting in the state of North Rhine-Westphalia to review the event on September 2. A previous interim government assessment released days after the tragedy blamed Lopavent for failing to adhere to prescribed security guidelines.

Though he will not appear before the committee, Schaller acknowledged that he had a “moral” responsibility in the case. “I was the organiser, and people wouldn’t have died if the event hadn’t taken place,” he said.

Der Spiegel reported last week that six Lopavent offices in Berlin, Duisburg, Essen and Cologne as well as Taufkirchen in Bavaria and Schlüsselfeld in Franken – where Schaller’s fitness studio firm McFit is based – were searched after the Duisburg public prosecutor sent officials to seize documents there.

The magazine also said that newly emerged documents from the Duisburg city administration show that police felt deceived by the organisers ahead of the event.