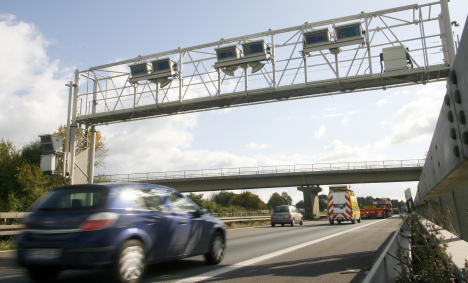 “Germany needs a street toll to control the flow of traffic,” Sinn wrote in a guest commentary for the Wirtschaftswoche magazine.

The usage fees envisioned by the Ifo economist would apply to all German motorways and city streets. A toll system would allow people to “use the existing street capacity so that drivers would tie up one another as little as possible,” Sinn wrote.

Sinn said tolls would vary based on the time of day – meaning those who were willing to reschedule their car trips during periods of lighter traffic would pay less. Drivers who used roadways at peak travel times would pay a toll to compensate others for the inconvenience of a delayed arrivals.

“This will ease the flow of traffic and increase the transport capacity of the streets,” Sinn said – even more than road construction projects worth billions of euros.

The Ifo economist foresaw no problems implementing the programme on German roads, which already feature motorway truck tolls – citing various street toll systems in France and Italy, as well as in cities such as Oslo, Bergen and London.

In Italy, Sinn said, drivers are no longer required to wait in long lines at toll checkpoints; instead, road fees are calculated as cars pass through toll stations and then debited from drivers’ bank accounts.

“The driver is no more involved than with his power and telephone bill,” Sinn wrote. “Why wouldn’t that work in Germany?”

Under his proposal, the German government would use the additional revenue to remit payment of car levies or other taxes, or put the money toward infrastructure investments. The tolls would also benefit the German economy more broadly:

“If every worker loses two hours a week stuck in traffic, the value of the time that he has needlessly blown away on the road amounts to more than €100 billion each year,” Sinn wrote.