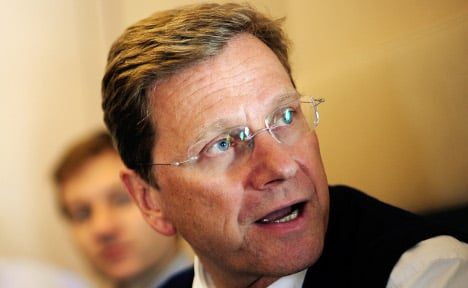 The three-day trip will take Westerwelle, who is also Germany’s vice-chancellor and leader of the pro-business Free Democrats, to Croatia Wednesday, Serbia and Bosnia on Thursday and Kosovo Friday, his spokesman said.

Westerwelle will meet with political leaders, business executives and non-governmental organisations in each country and visit German troops, who

comprise the biggest contingent with the NATO-led KFOR mission in Kosovo.

The minister is to hold speeches before Zagreb’s Academy of Sciences and the Kosovo parliament in which he is to press Serbia to accept Kosovo’s independence as a condition for EU membership.

He will also encourage the countries he is visiting, which emerged from the bloody break-up of Yugoslavia in the 1990s, to adopt the reforms required by the EU for accession, his spokesman Andreas Peschke said.

“We were one of the first countries to recognise Kosovo and one of the countries that has decisively contributed to a resolution of the Kosovo issue and we are very interested in positive economic and social development in Kosovo,” Peschke said this week.

“It is now time to focus on which practical steps forward can normalise and improve relations between Serbia and Kosovo.”

Kosovo unilaterally declared independence from Serbia in February 2008 and it is recognised by 69 countries, including the United States and the majority of EU members including Germany.

The International Court of Justice issued a non-binding opinion last month that Kosovo’s declaration of independence from Serbia did not violate international law.

Serbia has said it would never tolerate the independence of Kosovo and has put forward a draft resolution to the United Nations calling for talks between Belgrade and Pristina on “all open questions” between the two.

Croatia, which proclaimed its independence from the former Yugoslavia in 1991, hopes to conclude membership talks with Brussels by the end of the year and join the EU by 2012. But diplomats say this timetable may be ambitious.

Zagreb made a major step forward in June as it opened the last three of 35 policy “chapters” which candidate countries must successfully negotiate prior to EU membership.

Discussions on a justice chapter are the trickiest hurdle remaining. They will depend on the conclusions of a report on Croatia’s level of cooperation with the International Criminal Tribunal for the former Yugoslavia.

Among the six countries that made up Yugoslavia – Bosnia-Herzegovina, Croatia, Macedonia, Montenegro, Serbia and Slovenia – only Slovenia is a member of the EU.